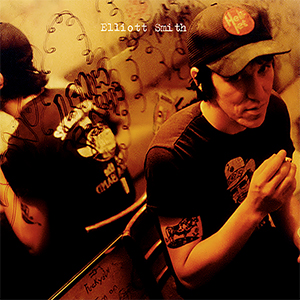 Someone recording an album by themselves isn’t unheard of; hell, at this point it’s kind of the norm. But when someone like Elliott Smith comes along and yanks a record like Either/Or out of his brain, it’s enough to knock you cold out of your chair and wake you up with whiplash. Call it vulnerable, call it Beatles-esque, call it a squeeze through the emotional wringer, but call it boring and we might be throwing hands. To insult it would feel like you’re bullying my child, that’s just the effect that Smith’s music has. Encrusted with tears, he strips himself bare and lunges. His double-tracked vocals pierce like the cries of a fallen angel. It’s close to impossible not to become intwined; Either/Or is Smith at the peak of his hypnotism.

As his would be big time rock band was dissolving due to lack of personal investment, Smith found himself on the cusp of solo stardom. His self-titled debut didn’t do much in the way of reception, but it was enough to get the intention of Beck producers Rob Schnapf and Tom Rothrock. A new record was taking form, his girlfriend and fellow musician Joanna Bolme’s house serving as the studio. And unlike the sounds of Heatmiser which he was becoming more and more estranged with, every note, every beat, and every line on Either/Or would be Smith’s own.

“Speed Trials” is a track that gently inclines, the drums and guitar line building slowly as Smith whispers in both ears. It definitely sets a tone. Smith has a lot on his mind and he’s not going to spell it out for you. Cryptic lyrics like “He’s pleased to meet you underneath the horse/in the cathedral with the glass stained black” ooze a kind of Dylan ambiguity that carries through the whole album. Though he claimed to have listened to Magical Mystery Tour front to back daily during Either/Or’s writing and recording, the album’s seamless vocal harmonies and economically layered production feel more akin to The White Album. In a far tighter space it also similarly offers a large range of emotion. Smith may be known for his quiet, controlled vocal style, but songs that pop like “Pictures of Me” and hit like “Cupid’s Trick” are anything but calm.

Laced between these lo-fi sonic explosions are acoustic driven ballads that showcase Smith in his purest form. Whether it be the metaphor-laden reflection on addiction that is “Between the Bars” or the heartfelt ballad “Say Yes”, songs that feature just a finger picked guitar lead with Smith’s virtuosically subdued vocal lead to some of his most intimate moments. What’s amazing about the record is it deceives you into thinking it’s simple. It feels so much like Smith secretly emptying his heart to you that you lose sight of the details creating that illusion: evocative subject matter, clever use of chords and tunings, the power of melody, cues from folk, pop, and post-hardcore. It entrances you, then before you know it, a tight 37 minutes have flown by and you have to replay it..

No, Either/Or didn’t set the world on fire, at least not right away. But it got director Gus Van Sant’s attention. One hit film later and Smith was playing at the Academy Awards in a suit white as the origin lie that got hisc a nomination. It was a fish-out-of-water performance for sure, reflecting perhaps what was to come with his briefly lived fame and subsequent legacy. Thankfully the film launched Smith to new found audiences and pushed his music to a generation that could appreciate his honesty. Smith would go on to make XO, another fine album of similar sentiment with a Hollywood budget, but nothing hits quite like the genius and sincerity of Either/Or.