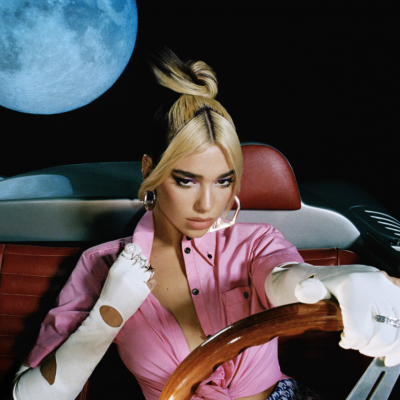 Dua Lipa’s rise to fame seems to mirror every post 2010 pop star’s rise to fame. A waitress at a cocktail bar with the dreams of becoming a recording artist signs a management contract, begins recording and inks a deal with a major label who are in the market for a female pop songstress. The relationship is mutually beneficial. She’s got the goods, in this case British, got a cool aesthetic, a graceful vocal and a solid debut record and Warner uses their resources to get her on TV and achieve international success. She collaborates with a big time DJ and their hit gives her the reach accessibility to everything from commercials to workout playlists to even performing aside alt royalty like St. Vincent on the Grammy stage. But unlike the many sub par artists too often churned out by the industry machine, Dua Lipa is honestly kinda good and kicks it up for album 2.

Now, writing this review late to the party allows a reaction to the numerous publications who called Dua Lipa one of, if not the greatest pop star of her generation. i. I’ll be damned if anything on Future Nostalgia indicates the longevity of someone like Rihanna or Robyn and ii. holy fuck, slow down. But I digress and while I hate referring to other reviews in my own (and trust me I really fucking hate it) i. it’s an explosive take that warrants a response and ii. there’s a reason Lipa is turning in so many glowing write ups for her sophomore.

First and foremost, Dua Lipa’s personality and confidence are undeniable. She’s one of the best representatives of pop music’s migration from Michael Jackson sensitivity to the more commanding nature of Prince. But Dua Lipa is far from the female version of Bruno Mars and colourfully pulls from other areas of the retro revival like new wave, synth pop, modern disco and even the newly minted vintage indietronica.

It’s highly invested in post commercialized indie, something more akin to something like Classixx, CSS, or even the more approachable songs of Holy Ghost. Since Dua Lipa is admittedly a pop artist, this makes it more ok than an indie artist going pop. It’s also seriously indebted to Kylie Minogue who modernized the basics of disco for the club floor and the workout mix about 15 years prior.

When asked of her motivation to create the record, Lipa’s reaction seemed textbook by today’s standards. She wanted to make music that paired nicely with classic dance pop songs, nostalgic yet fresh and unique. In 2020, what pop record isn’t nostalgic? Anything futuristic or outside the box nowadays gets labelled subversive, but part of Future Nostalgia’s charm is that it forgoes any attempts to reinvent the wheel.

I could sit here and question the predictability of its subject matter from relationships to sexual empowerment to pop music itself, but Lipa’s mission statement to make a great dance pop record makes Future Nostalgia near bulletproof from douchey interrogation, because honestly it delivers. No song reaches over 4:30 and the album’s modest 11 track sequence doesn’t go for ample streams with a double disc length a la Drake’s overlong Scorpion. Instead Future Nostalgia offers a tight, no filler, no ballads 37 minute dance party. Apart from that, Lipa represents a post-Gaga, post-Rihanna world where the pop star, very much in control of an artistic vision is much less a vessel. Look at that album cover. Dua Lipa isn’t just in the driver seat, she’s the only one in the car.

Now if you’re like me I know what you’re thinking: a lot of this would fit right in during one of those silhouetted iPod commercials. But it doesn’t matter since it’s often revived by an incredibly committed performance from its star. It’s what saves “Levitating” from sounding like an S-Club 7 song for the new decade. Lipa’s energy on the mic is undeniable and better yet charming. Her vocal range, somewhat limited is highly efficient and while not particularly powerful, is totally effective and commanding. Her distinct deep register and falsetto are used for dramatic effect underlying buildups.

The mix is about as clean as you’d expect from a record label that likely poured millions into the production. Regardless, even cynics will have a difficult time not busting a move to awesome tracks like “Cool” or “Pretty Please”, marvellous songs elevated by something as fundamental as a great, natural slap bass line.

Like most pop albums that aim to please everybody, inevitably alienating a few along the way, It’s not perfect. Some lead singles aim so hard at appeasing the current climate they can come off as near conceited. “Physical” is trying so hard to be palatable that it comes off like a karaoke version of Flock of Seagulls.“Hallucinate” is similarly cheesy albeit forgettable. Multiple times through first listen I often find myself thinking that Lipa sounds far cooler in the mid tempo range though this does not apply to “Boys will be Boys”. The closing number is poignant and tasteful in its breakdown of gender imbalance, though it does little to put the mission statement forward. The record’s best material proves that energy and rhythm don’t have to compromise progressiveness and the track nearly calls the cops on its own party.

For the most part, Lipa has delivered a satisfying, bombastic, slick dance pop record in Future Nostalgia and while she may not possess the vocal power or writing skill or presence to blow her many contemporaries out of the water and make her the best pop star of her generation, it’s certainly star making and impressive enough to qualify Dua Lipa as the most promising.