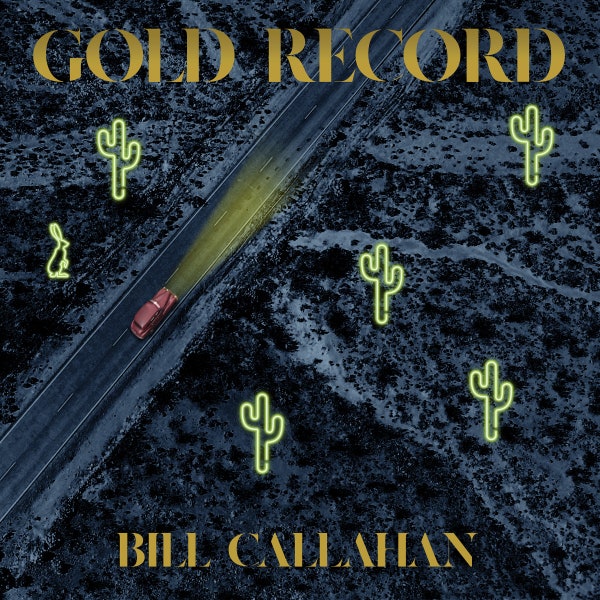 When veteran independent folk musician Bill Callahan returned after a 6-year hiatus in 2019 with Shepard in a Sheepskin Vest, he rolled out a blissful double album created from the firmament of domesticity. Recently married and rolling down the road of parenthood, his once dour steely-eyed outlook suddenly got a bit brighter and the will to live got a bit stronger. Out of that same creativity energy comes Gold Record, an album of both outtakes and new songs individually strong enough to stand on their own. Who would have thought that the quietude of a newfound domesticity could produce an artistic hot-streak out of Callahan’s infamously shy solipsism?

A signpost of the changes in Callahan’s life is raised on “35” where he sings: “I can’t see myself in the books that I read anymore / Used to be I saw myself on every single page / It was nice to know that my life had been lived before.” We can hazard a guess that these could be the books of youthful angst, books one might read to find solace and identification in similarly troubled narrators. But now released from these works, Callahan can focus on his own art and the real people living and breathing in the world around him.

Freeing himself of fiction, Gold Record explores instead finding oneself in others, young and old on “The Mackenzies” or “Pigeons”. “Pigeons”, a song sung from the perspective of a wedding limo driver, expresses Callahan’s newfound generosity and sense of community that came with getting married himself. It’s a remarkably humanist expression, “When you are married, you are married to the whole wide world, the rich, the poor, the sick and the well.” No longer made miserable from lovers entwined passing him by, he can comfortably declare that he thinks marriage is just “a good thing”. But don’t be fooled by the simplicity of Callahan’s delight in quaint newlyweds, his imagery switches quickly to the vernacular cosmic as he describes marriage as “two atoms from the big bang getting back together with the old gang.”

Appended to this married life is “Breakfast”, which also recognizes the institution’s cultural power imbalances and trade-offs. A husband sings about his wife getting up early to make breakfast for him, and how she abstains from alcohol while he drinks so that they can avoid fighting. The routine, lulling pace of “Breakfast” shows – from the male perspective – the inequalities of domestic life and the value of work around the home often contributed by the female partner.

Late-night TV, a common theme in Callahan’s music, shows up on “Cowboy”, a laid-back ballad finding parallels between the narrator’s acceptance of an uncomplicated life and the iconic cowboys gracing the films on 2:00am cable. The song’s goofy C&W guitar and whistling gradually opens up to a swooshing synthesizer whisking Callahan off to dream. It’s the sort of song that reflects newfound fatherhood: just as it’s Callahan as father seeing himself in the stoic cowboy, it could easily be a young son admiring the heroics of elemental western stars like Randolph Scott or Jimmy Stewart.

The apparent simplicity of Callahan’s music becomes a guise for his discovery of what it means to be a vocational musician. On “Another Song” life itself becomes a journey of creation from song to song: “As the shadows of the leaves on the wall/ Grow and dissolve/ Almost in time to our chests' rise and fall/ Rise and fall/ As we lay on the bed wanting/ For nothing at all Except maybe another song.”

From this calling to create also comes the respect earned over the years of skillful personal straight-talk that thankfully ducks cliché. Rather than make grand statements about America’s social order, “Protest Song” instead ironically protests a protest song viewed premiering on The Late Show: “Oh my god,” sings Callahan, shocked, “His songs are lies/ Step aside, son/ You’re gonna get hoit.” Without taking anything away from Bob Dylan’s times-they-are-a-changin’ trailblazing, folk songs aren’t always meant to be played with for blunt political aggrandizing.

Despite the sole moment of bad vibes on “Protest Song” – given levity by an awkward film noir accent – Gold Record shows Callahan’s overall progress as a songwriter. Yet latter-day Callahan has again retreated into the sparse arrangement of Smog after his brief dip into the pastoral orchestras appearing on 2009’s wonderful Sometimes I Wish I Were An Eagle. His band and instrumentation have since been doing less and less, and the records have been getting better and better. Gold Record is centered around softly strummed nylon string guitars, but a reverb soaked electric guitar lead occasionally shows up alongside a trumpet blowing bolero. The arc of his career has bent back from the sad darkness of his early career moniker Smog and around again to the sunny optimism and Grade-A songwriting of the current music under his birth name.

Callahan wasn’t always a likely contender for the pantheon of songwriters; he’s been too obscure, shy and lacking any sort of iconography plaguing The Greats. But don’t let that distract you from the undeniable fact that his salt-of-the-earth, old-soul Americana has developed into superlative songwriting of the sort found in Nick Drake, Townes Van Zandt or Kris Kristofferson. It’s fitting, then, that the closing track “As I Wander” makes the clearest bid for Callahan as a self-reflective All-Timer in the album’s most Dylanesque moment where the songwriter realizes his boundless scope and suddenly seems to be singing about everything. The humble opening lines state Callahan’s craft at its most surface level, “I travel, I sing / I notice when people notice things.” True enough, but Callahan isn’t going to sell himself short, as he admits to his role beyond mere noticer, more accurately a caretaker, chronicler, and perhaps a scribe of destiny itself: “It's times like these/ That the forces at work begin considering me/ As the link between death and dreams.” And the time spent between dying and dreaming is, of course, living, and that’s what Gold Record is all about. So much for simplicity.