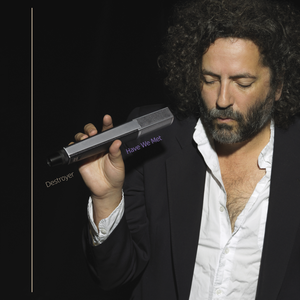 Now fully settled into his mid-career sophisto-pop shift, Dan Bejar, the mastermind behind Destroyer, has safely quadrupled down on this cherished aesthetic with Have We Met. While the instrumental pallet returns familiar timbres and tonalities, the album is an opportunity to Bejar to once again flex his powerful lyricism which remains unmatched for its eccentric wittisms.

The elements refined on Kaputt remain intact, drum machines, synth pads, rounded bass lines, and cutting single-coil guitars courtesy of the unsung Nicholas bragg. Tracks like “Crimson Tide”, “It Just Doesn’t Happen”, “Cue Synthesizer” follow a now well-established Destroyer pattern, ambient wash fades in, a few hooky lines from Bejar, drum machine kicks in with a disco-adjacent rhythm. It’s worked for Bejar so well because unlike the scrappier playing on early-career highlights like Destroyer’s Rubies’ “European Oils” and “Painter in Your Pocket”, the  vocals are no longer tied to rock rhythms, but instead wander freely above the synthesizers and sequenced drums, content to run their programming rather than string out a live band.

As always his sense of drama announces itself as he describes scenery on “The Raven” as “Here in the city of dying embers” or his childhood neighborhood of Vancouver's “University Hill” as a “fortress of solitude” rendered useless by oblivion’s reflexive gaze. This dreary portrait of Bejar’s hometown Vancouver is unsurprising considering it’s consistently ranked as one of the least affordable cities in the world and famous for its ceaseless rain, but the source of all Destroyer’s glowering can hardly be said to be merely economic or environmental.

As is evident in his disheveled slant gracing the album cover’s halogened stage, Bejar is a bohemian at heart. He’s less concerned with economic upheaval than he is artistic decadence as he mocks the passing of a company man on “ The Television Music Supervisor”. On “The Raven”, he invites the listener to look at the world around them before recanting, “No, don’t look!” Even Bejar’s own demise is hardly a concern where on “University Hill” he predicts getting hacked up “arms, legs, mouth, eyes” - sounding laconic at best - before quoting New Order’s “Thieves Like Us” as he sighs “It’s called love.”

Tipping dangerously close to alcoholism, Bejar pulls the mania out of dipsomania, happy to be “drunk on the field again” in “The Raven” and reveling in the violin, moonlight, and moonshine on “It Just Doesn’t Happen”. Thankfully this relapses into Bejar’s core strength of soused atmospherics on “The Television Music Supervisor” and “foolssong” where he drunkenly paints pictures before lamenting him and his partner’s infantilism at climax, “It ain’t easy being a baby like you / It ain’t easy being a baby like me.”

This self-proclaimed “bad poetry” has long been Destroyer’s strength because it always sounded so off-the-cuff and self-assured, especially when backed by Kaputt’s radically ironic reinvention. While Have We Met can still recall previous grand statements on Kaputt’s “Bay of Pigs” or Poison Season’s “Times Square”, its the first Destroyer album in over a decade to feel like its content to rest on its laurels.

By pairing away the brass that knocked Kaputt out of the park and Poison Season into Van Morrison territory, Have We Met is left with instrumentals more skeletal like “Cue Synthesizer” where he’s stooped to mocking his own fake drums. Yes, the richness of the seventh chords on “The Man in Black’s Blues” are still pretty, but they lack the full-tilt catharsis of “Bangkok” or the aching melancholy of “Girl in a Sling”.

This is easily forgivable as the obfuscations common to Bejar’s lyrical approach is hand-and-hand with his Dylan-esque psychedelia, consistently goading the listener through labyrinthine twists and turns. It’s hard to criticise what seem to be lyrical misses or predictable instrumentals on Have We Met when the inherent ambiguity allows the source to retreat into the folding interpretations. That’s just Destroyer, as he’s always been since City of Daughters.

Have We Met then, is an album that announces its familiarity in its title. Despite the aesthetic break from his previous work, the same lyrical quips and revelations lurk in every song even if they don’t sound quite as high. The shift towards expensive, high-tech sounding instrumentals is fitting for a guy who has ascended the echelons of indie-rock from rootsier beginnings, and a fine choice to embrace the ‘80s while the rest of his peers languished in the burst of the indie bubble this past decade. But as much as he dresses up the instrumentals in sophistication, Bejar’s beatnik impulses will always get the better of him, drunk on cheap wine and slinging obtuse insults passersby, you’ll be quick to answer “We have met.”