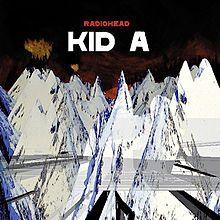 Watching Radiohead miserably sitting through interviews throughout the 1998 tour film Meeting People is Easy gives you a sense of how jaded they had become. Jaded about the expectations placed on them and jaded about any potential longevity in music. They often escaped to hotel rooms and vans, listening to Can, Stockhausen, Mingus, Aphex, and Harry Partch to entertain themselves. In establishing their insular world, the band forged an implicit commitment to remain true to the artistry they found meaning in. As guitarist Ed O’Brien put it in his “Kid A diary”: “if you really love what you're doing then that is all that matters...” The band had to do what they loved in order to survive, but what they loved was no longer the rock band format (which, to a band as forward thinking as Radiohead, was already seeming prehistoric); what they loved was now something totally in defiance of it, as the best “art music” always tends to be. On Kid A, Radiohead made sense of that paradox by approaching their music in a wholly different way.

To understand Kid A is to understand the prism of negative emotions that is the human condition. While the negative is not nearly the entirety of our existence, it’s a necessary part of life that we inevitably must come to terms with. Kid A shameless bears all of it; it embodies aggression, depression, fear, panic, anguish, despondency and confusion to top it all off. Its tone shifts from icy digitalism and hissing noise to orchestral accompaniment for acoustic guitars and soaring falsettos. All of it serves to accentuate the frail humanity that is the mess of firing neurons and binding chemicals housed within our skulls. While the band gets aggressive on tracks like ‘The National Anthem’, others like ‘How to Disappear Completely’ undercut it all with palpable tenderness, much like our own frail mood swings. This was not an easy time for Radiohead to be Radiohead, but what they delivered in spite of that was an opus so astonishingly human, it was able to re-contextualize their struggles altogether.

The main change to their approach was the instrumentation. A rock band is often relegated to a rotating cast of familiar sounds, but Radiohead’s shift in approach brought with it endless creative freedom. As often noted by Thom, post-OK Computer, Jonny bought every Analog Solutions module and taught himself how to use each of them. The result is the modular mastery we hear on ‘Idioteque’. He also single handedly resurrected the ondes martenot - an early 20th century electronic instrument that controls pitch by the movement of a ring hoisted by string. You can hear the ondes all over the front half of the record, with those long glissandos floating through waves of reverb and delay, leaving jet streams of emotion in their wake. The band sought out additional synthesizers, Kaoss Pads (touch based FX/samplers), pedals, drum machines, and samplers to elevate their music, while bringing in jazz horns to round it all out. With this sonic palette at their disposal, the band worked tirelessly for over a year to refine their songs and create something unique. And by leaning into computer-controlled instrumentation effortlessly, the band was able to use these new boxes to express emotional facets that they wouldn’t have otherwise touched with their acoustic guitars and RAT stompboxes. This was especially profound given that the band had not approached these sonic territories previously. It was uncharted waters, both for the band and for their listeners.

‘Everything in its Right Place’ holds a special place in the pantheon of godlike Radiohead songs for that very reason; it was the listener’s first taste of what was abandoned and what was to come. ‘Everything’ begins with Thom playing a Prophet 5 synthesizer dripping in analog warmth, pulsing in 10/8 timing no less. Look to stage left to find Jonny on the floor, running Thom’s mumblings through a Kaoss Pad. Thom’s mangled vocals flutter throughout the track like reels of overflowing magnetic tape, and for a moment in the introduction, we hear something resembling “kid a”. ‘Everything’ ultimately creates a cold, digital spaciousness, underscored by the nakedness of the track. It’s just vocals, those luscious analog keys, and Thom’s voice controlled by the hands of Jonny Greenwood. And the mix of it all as the envelopes close that warm Sequential 4-pole low pass filter in the final minute of the track is too poignant to disregard.

As ‘Everything’ fades, a descending oscillator slowly ushers in the lullaby-like keys of ‘Kid A’. Smooth, filtered synths create an almost melancholic chord progression underlying the song. Thom’s vocals, now more mutated, bring a dissonance that fits perfectly within the comfortable and hushed sounds of the song. When the rollicking drums do let loose a minute and a half into the song, all the bespoke parts come together in unity to show us how deep in this sonic exploration the band had dove. The momentum halts for a moment when a hazy analog poly synth enters at the back half of the song, only for it to charge onward. The track ends in a daze with the cry of a baby, as if you’re waking alongside it.

The album’s third track, ‘The National Anthem’, begins with the most biting bass guitar tone that Radiohead has ever put to tape. Everything soon densifies in the midst of the booming drums, the off-key horns, the gliding ondes martinot, and of course, Jonny’s sampled AM radio. It’s hard to even pick it all apart before it pipes down to make room for another dissonant Yorke vocal. This time, his microphone is bursting with feedback, singing only a few select words. The horns get their spotlight with a robotically rigid two note marching band bop, only to grow more and more dissonant and meandering. Soon Thom is yelling “it’s holding on” like his life depends on it. It’s a beautiful chaos, and thankfully one that the record makes its way back to in its final half.

‘Idioteque’ opens with a thumping modular beat of Jonny’s creation. On top of that, some fantastic musique concréte samples Greenwood pulled create a technological chilling. This tone makes the piece the perfect compliment to Stanley Donwood’s album art; a digital ice age, pixelated and gritty. The Paul Lansky-sampled chord progression, with their odd voicings, creates a desolation that gets twisted and contorted into anxiety and panic as the band piles on top of it. Here, Thom’s performance demands attention. Each of the song’s lyrics were hand-picked one by one out of a hat, yet the randomness of their assembly only serves to heighten the song’s panic, as Thom recites off a mixture of emergency bombing instructions and maniacal cogitations. His ferocious repetition of lines like “I’ll laugh until my head comes off/ I’ll swallow until I burst” keeps the pandemonium at an all time high as the modular beat kicks, punches, and scratches beneath him in quantized kinesics. And as soon as Thom hits his soaring chorus falsetto, the cold digitalism of Kid A arrives at it’s true context. Although you feign disbelief, you know deep down that the anxiety is rooted in reality. “We’re not scaremongering/ This is really happening.” The song ultimately gives in into its own entropy, exploring that addictive modular back beat in all its clock divided wonder.

Of course, the record does have subtler moments, yet each remains equally as revealing about the state of the band at this time. Tracks like ‘Treefingers’ show a band interested in so much more than what they were famous for, practically begging for the masses to leave them be. Others, like ‘In Limbo’, paint a picture of a band who had to laboriously rework their material in order to make it all fit together. ‘Optimistic’ also has a subtle edge despite it’s heavier rock sound anchored by a howling Thom. There, Thom writes with a sarcasm that I’ve never been able to pin down; one that’s more cooled apathy, more comfortable casually dropping Animal Farm references rather than any passionate optimism. It still eludes me whether Thom’s inhabiting the perspective of the oppressor or the oppressed, and therein lies the allure of ‘Optimistic’.

‘How to Disappear Completely’ is one of many incredibly moving ballads in Radiohead’s catalogue; even more so as the first proper use of the guitar on the record. The lyrics, inspired by a mantra Thom used to tell himself in the throws of his worsening mental state, fully embody the numbness of a depressive episode. The noises and ambiance in the background of the track slip away from the listener without much thought, like the colour of life fading to monochrome. Sometimes in that deep state of blue, telling yourself the absurdist paradox of the lyrics (“I’m not here/ This isn’t happening”) is the only thing that can keep you going.

Kid A is a beautiful yet dark album. There’s chaos, there’s tension, there’s atonality, and there’s dissonance. So naturally, there’s an elegant and cathartic ending to it all. ‘Motion Picture Soundtrack’ embodies a melancholy nostalgia with the emotional mastery only Radiohead could devise. As the album’s ending, ‘Motion Picture Soundtrack’s beauty is mesmerizing; it’s gorgeousness only highlighted by the distinct departure from the record’s digital veneer. Each ring of the harp strings, a phosphorescent twinkling in the distance. Each pump of the harmonium, a life-affirming exhale. “Red wine and sleeping pills/ Help me get back to your arms/ Cheap sex and sad films/ Help me get where I belong.” It’s a sad reality, but it’s a reality nonetheless. Your neurotransmitters may be shot but you know that where you belong, fields of serotonin and blankets of oxytocin await you. Your reflection in the bathroom mirror opines back at you, with the faintest of smirks: “I think you're crazy, maybe,” and after all, you know yourself better than anyone. The words ring out like an antidote to the chaos of the rest of the record, paving a path of serenity above it all. It’s a sad yet graceful moment, and a recognition we all have to make at some point. But just like that, the moment escapes you; you’ll see it “in the next life.” Fortunately, on the record’s hidden track, the band is kind enough to grant listeners a peak into the next life, with a 30 second flurry of the reversed tapes. It’s the auditory parting of the clouds.

In releasing Kid A, Radiohead freed themselves in a few ways. They freed themselves of any expectations of being the band that “saved rock and roll”. They also freed themselves from the obligations of their own instruments. Gone were the days of everyone laying down parts on their respective guitars, basses and drums. Now, the band members had to put the song ahead of their egos. If your part wasn’t contributing meaningfully to the song, you wouldn’t be playing on it. This freed Ed and Colin from grasping their guitars, instead leading them to experiment with synthesizers, samplers, and relentless FX chains. It allowed players like Phil to embrace the drum machines and robotic rhythms he toyed with previously, and granted Jonny a perpetual licence to play whatever the fuck is going on musically in his head (because nearly all the time, it works). It pushed Thom to reimagine his vocal parts as instrumentation. It forced each member to tinker on their own time in order to bring some splatter of sounds to the next session. But it also forced the band to rethink how to musically express emotions, using new tools. In essence, the shift in how the band approached music forced Radiohead to level up in nearly every aspect. Kid A is the child of that greatness.

For more on the story of the album's conception and its outcome read our history lesson here.