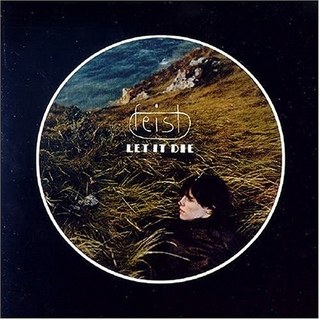 People like to frown upon “Lounge Music”, the music itself and oftentimes the label: A write off given to music some consider too boring to give a proper chance or a relaxant for an older audience. When it came out amidst other releases by Norah Jones and John Mayer, that’s seemingly all critics and American audiences had to say about Feist’s sophomore Let it Die,  using the genre to define the hypnosis of its arrangement, the vulnerability of its subject matter, how it strives to traditionalize romanticism, and the gentle touch of its performances.

But don’t reduce Let it Die to a mere genre excursion, the album has come to represent one of the cornerstones in a resurgence and next great push of Canadian music. It was dropped right between instant classic releases by Arcade Fire and Broken Social Scene, all parties bringing a new amorous sincerity to modern alternative. Yet Feist never got the same recognition she deserved for making such a perfect record. Its wikipedia page is criminally short for the contributions it’s made, redefining the value of the singer songwriter at the dawn of the millennium.

Feist had already been a fixture across the Canadian landscape singing for punk band Placebo while growing up in Calgary and playing lead guitar for By Divine Right before she emerged into awareness with Toronto’s premier rock collective Broken Social Scene. She moved to Toronto splitting a Queen West apartment with electro punk stalwart Peaches who took her on tour as a stagehand with Elastica and M.I.A. (fucking sign me up for that). There she met Chilly Gonzales, Peaches’ frequent collaborator and the architect behind Let It Die’s warm diverse array of sound.

Her charisma on record and stage with BSS entered the indie consciousness despite her famous apprehension of jumping upon the indie band wagon and launching a solo career. Thankfully she released her debut Monarch in 1999 without a label to modest reaction while living in Toronto. After her stint with BSS she left for Paris with Chilly, who had already been in Europe for years due to disillusionment with the Canadian music industry machine. Together they would evolve her most recent set of demos into Let it Die before moving there permanently. Recorded entirely in Paris, the romantic glow of the city illuminates the record and informed its sonic direction, abandoning her indie pop roots and favouring jazz, bossanova, French pop, and lounge yielding something more adventurous.

At this point, Leslie’s charmingly understated vocal had come full circle, evoking power, intimacy and a balance of grace without compromising soulfulness. It’s a magical sensitivity and bittersweet gentle touch that permeates even the more rhythmic material. Her sharpened ability to invoke insecurity balanced by her attention to intimacy seemed to give her songwriting a quantum leap, something comparable to 1970s Tin Pan Alley. Feist more than before seemed to have attained a devoted attention to concept and melody; the songs aren’t so much concise as much as they don’t waste time.

The current generation of indie obsessed males connecting with their inner sensitivity might conceal it, but Let it Die has gone on to hold the low key reputation of a great love making album. Yes, obviously in the sensuality of its sonic picture, but aside from that Feist practically authors the book on the course of a relationship.

We open with “Gatekeeper”, a beautiful jazz tune about the mutual reliance between partners. "Well it's time to begin as the summer sets in, it's the scene you set for new lovers". It’s a fitting introduction to one of the most important love records of the era and released in May of 2004 set Let it Die for heavy rotation that summer. From there we get the skinny on love in Feist’s beautifully restrained soprano.

The incredible “One Evening” captures a moment of initial infatuation before “Lonely Lonely” wakes our hero up in a moment of powerful realization. “Secret Heart” draws parallels between sexuality and playful innocence while the breakthrough hit “Mushaboom”, combines a doo wop refrain with the singer’s Canadian coastal community birthplace to hold a candle to the blissful peak of a loving relationship.

“Let it Die”, the centrepiece of the album represents heartbreak and is perhaps the best song on the album. Possessing phonetic perfection in its hook, enigma in its words, and stillness in its music, it also thematically represents song as a window into the deep emotional psyche of its composer.

Side B consists entirely of covers, which at the time received criticism in its stalling of Feist’s brilliant originals, but I actually happen to think they’ve aged considerably well. On the sexy, danceable “L’amour Ne Dure Pas Toujours”, Feist delivers the best French pop crossover song since Lennon and McCartney’s “Michelle”. “Inside and Out”, the immaculately produced, lush, and lasting Bee Gees cover infectiously commanded by the genius of Jason Beck, better known as Chilly Gonzales remains the Side B highlight. Throughout the album Gonzales plays the role of multi instrumentalist and gives the record colourful fluidity playing everything from vibraphone to drums to accordions to disc scratching and flexes his virtuosic piano skills. Aside from Feist’s guitar playing and a few outsourced horn players everything you hear on the record is him and even his clapping rhythms display humanity. We end with Feist’s regretful realization on “Now At Last”, now in the dead of Winter and with a dissolution beyond repair, comparing herself to a bird who seeks a new nest.‍

Let it Die’s wide variance of styles carry a heightened sense of cohesion brought together by Leslie’s sharpness as a songwriter and the tenderness of her vocal. Feist and her co-pilot Chilly jump between aesthetics and styles but always seem to find their way back. It’s the sound of a brilliant musician and an even more brilliant songwriter liberating each other. The surprise success of “Mushaboom” and its prominent use in Lacoste’s advertising campaign pushed Feist to an international audience and gave her the license to make The Reminder and Metals much later, but Let it Die remains her definitive work. It’s a Canadian classic and maybe the greatest love record since Blue to come out of the Great White North.