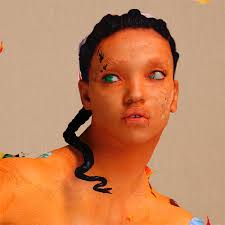 When FKA Twigs dropped her shockingly unique debut album back in 2015, it seemed like the fallen alien had innovated an entirely new singer/songwriter subgenre. The music’s unclassifiable aesthetic was interpreted by many journalists as avant-garde R&B, a classification that Burnett indignantly dismissed as racist. The abrasively industrial turn she took on her excellent follow up EP, M3LL155X, and the unexplained absence she took following its success only further obscured the aloof identity that was lurking beneath her ostensibly metallic persona. Who was Tahlia Burnett, and where did she go?

The album’s first single "Cellophane" and the accompanying PR clarified the mystery: Barnett was suffering from serious reproductive health problems that inhibited her ability to write, create, or perform music. Her health trials are beautifully explored throughout the album through feminist meditations on the relationship between a woman’s body, mind, and work. By structuring MAGDALENE as a postmodern interpretation of the enigmatic biblical figure, she cleverly rejects both the labels and expectations that have come to define her influence over the past decade.

Twigs has always taken an active production role on her projects, but MAGDALENE sees her taking on a more distinctly curatorial responsibility. The steely production of electro-savants like Arca, Nicolas Jaar and Oneohtrix Point Never still pervades the album, but it takes a backseat to Barnett’s unflinching vocal vulnerability. While her earlier material is characterized by a tug-of-war between metallic detachment and emotional exposition, MAGDALENE peels back the self-protective film that once distinguished her persona from her art. This embrace of unfiltered intimacy abounds across melodic tracks like “Sad Day” and “Day Bed”, but fans of the discordant M3L155X will delight in her characteristic dissonance on the pervasively infectious “Fallen Alien”.

Much like Fiona Apple, D’Angelo and Frank Ocean, FKA Twigs is an artist who knows how to effectively bide her time. It may have taken four years to get here, but MAGDALENE is an astonishing revelation from an avant-garde singer/songwriter who has finally secured her place as a peerless sonic innovator.