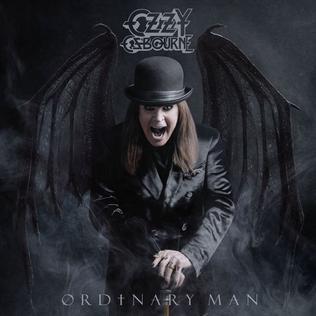 “And the truth is that, I don’t wanna die an ordinary man.”

The last few years haven’t been kind on Ozzy Osbourne. From a case of Staph infection, worsened by a fatal case of Pneumonia, a fall from his bed leading to surgeries and drawing the curtains on his world tour - it’s been a long list of sufferings. The misery piled up further when this February, the grand old man of metal announced that he had been diagnosed with Parkinson’s Disease. Recoiled in pain, the title track from Ozzy’s new album thus finds him reminiscing over the days gone by and hoping that time doesn’t fade his fame. Though age may have sobered the madness and mayhem that followed his days of hedonism, his persona still hasn’t been tamed. Metal’s high priest is still worshipped with the same fervour as his peak Black Sabbath days and his newest offering at the altar of rock, is anything but ordinary.

Ozzy was introduced to producer, guitarist and singer Andrew Watt during the recording of “Take What You Want” - a surprise collaboration track on Post Malone’s multi-platinum album Hollywood’s Bleeding. And for the Ordinary Man project, Andrew Watt, Ozzy’s newfound confidante has brought together an extraordinary crew of rock’s most coveted names. There’s Elton John, Slash, Chad Smith, Duff McKagan, Tom Morello, Charlie Puth and of course Post Malone - an Avengers-like ensemble that have united to pay their respects to Ozzy. The result is an album packed with a star cast of classic and modern day stalwarts, with Ozzy leading them as the main act. Providing a rare chance to experience such a fusion of artists, sounds, styles, genres and eras, the album is a joyride for rock and metal fans.

It begins with “Straight to Hell’ with Charlie Puth playing keyboard while Slash takes over riffing duties. Once the ominous setting has been established, Ozzy takes over to unfurl his sorcery of doom, death, and darkness. Further in the album, you will find tales of debauchery that only Ozzy could pull off. On “It’s a Raid” he remembers the time he called the cops by mistake while sitting in a room strewn with cocaine. While on “Scary Little Green Men” he warns of aliens living amongst us as Tom Morello of  Rage Against The Machine and Audioslave fame weaves a thundering futuristic soundscape.

But other than scaring and shocking you with tales of outwardly proportions, Ozzy can also ponder and look inwards with wisdom. Throughout, he meditates over his fate and what lies next for his legacy as time ticks by. On the title track “Ordinary Man” - Ozzy’s first-ever collaboration with Elton John and on “Under The Graveyard” the 71-year-old veteran delivers dramatic ballads that tugs the loyal fan at their heart. “Don’t take care of me, be scared of me. My misery owns me.” The lyrics paint the picture of a frail master stuck between the pinnacles he scaled yesterday, while flinching in today’s pain and misery. He’s also come to terms with mortality and lurking death as he accepts that “Under the graveyard, we’re all rotting bones.”

Rock and metal fans who grew up idolizing Ozzy would always want to remember the man as an imposing presence, who towered over the genre as one its greats. But it’s tough and painful to see your heroes fall from their lofty highs. And when Ozzy pleads on “Ordinary Man”, “Don’t forget me as the colours fade” it’s a harsh reality and time check for the loyal fan. But that doesn’t mean the darkness inducing, bat-chomping, devilish, Black Sabbath notoriety of Ozzy has mellowed down.

“Today is the End” starts with a guitar intro that recalls early Metallica, while Ozzy summons the evil as he reminds “the devil loves a parade.” It’s a dash of thundering drums, dramatic guitar interplay and Ozzy’s sneering vocals, the best they’ve sounded in years. Back in 1970, Black Sabbath released two albums that marked the arrival of metal - Black Sabbath and Paranoid. Fifty years later, Ozzy turns the clock back  with “Goodbye”. Its arrival with a thumping drum beat and his vocal flow is a clear nod to the classic “Iron Man.”

But the only qualm that can be picked up is the half baked relevance of “Take What You Want” where Osbourne is delegated to more of a feature spot than a lead vocal. First appearing on Post Malone’s Hollywood’s Bleeding, it gave Ozzy his first Billboard Top 10 single in over thirty years. But carrying forward that track on this album doesn’t fit its mood and sound and sticks out like a sore thumb.

‍
On Ordinary Man, Ozzy Osbourne delivers a stellar show starring in a plotline he loves to be a part of - the master of doom, cloaked in black, howling to the moon. He has not let his recent pain and misfortunes dampen his will as he returns, not to his lofty highs, but definitely to a milestone worth celebrating. This may not be Ozzy at his peak, holding a candle to Blizzard of Oz or No More Tears without reflecting its power, and certainly not a reincarnation of his Black Sabbath era black-magic. But one can look fondly at Ordinary Man as the swansong to an artist who lived every moment of his life, the way he performed - confidently marauding his way through life’s darkness with a middle finger raised to the devil.