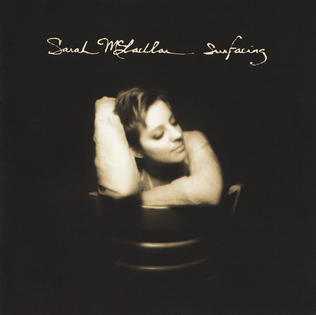 In the leadup to Surfacing, Sarah McLachlan’s personal life was in tatters. She had built a reputation as an ethereal folk songstress with a gorgeous voice and powerful performances at the piano with her wave making Fumbling Towards Ecstacy. Her romance with keyboardist Dave Kershaw had met a bitter end and a gruelling two and a half years spent touring left her jaded and exhausted.

Under the advice of her manager she ran away to Vancouver to decompress, bought a new home, a new piano, and adopted a black lab. The sabbatical gave her creativity another breath, reinstated her control as a songwriter and she thrived again with a collection of new songs that seemed to just flow from her pen. She returned to Montreal where her favourite producer Pierre Marchand awaited their next project. Surfacing benefits greatly from this jolt in creativity and naturalness, but the inspiration would continue.

She also found love again, this time with her drummer of seven years, Ashwin Sood. Together they ran away to Jamaica during the album’s sessions to tie the knot in a tropical ceremony. Little did either of them know the wide reach Surfacing would give McLachlan.

Listening to the record today, its place in the market becomes obvious as a collection of near soft favourites for the right hand of the radio dial, but Surfacing’s best material, conveniently its best known songs, not only stands among the finest music of its time written and performed at a piano, but provides a unique perspective of the instability and uncertainty of love. Throughout the album she diffuses the conformity that plagued her adolescence and faces the things about herself she considered ugly. I have complete confidence that you will be holding back tears singing these songs for the rest of your life.

This begins with the ambivalent declaration of “Building a Mystery”, which combines Jesus, vampires, and the mystery of the night to viscerally criticize her beautiful lover and his ego. But it’s also centred around the fallacies of religion, how our insecurities put up a facade and stop us from achieving happiness. Even in a four minute space, McLachlan seems able to move mountains.

“Sweet Surrender” is an incredible display of viscerally atmospheric sound which similarly questions her faith, but it can’t be that obvious. It’s about giving yourself up to somebody and embracing one’s vulnerability. The hit pushed the singer songwriter into the upper rankings of the US billboard with special attention given to its captivating vocal performance. inspired by the tragic Nicolas Cage film Leaving Las Vegas about two ultimately pathetic people who completely accepted each other for both their beauty and their flaws, it finds closure in this undertaking and reaffirmation for those who consider themselves unlovable.

McLachlan almost never directly addresses if this is a lover, friend, or relative which makes the best material on Surfacing a catch all and accessible to nearly everyone who inserted its disc. The phenomenal “Adia” is a showcase for McLachlan’s godly gift for melody and subtle skills as a story teller. It’s about the admission of one’s own flaws that doubles as an apology. Reflecting in a 2016 interview with Lenny she would explain that the song was inspired by her sleeping with and then falling in love with her best friend’s ex. Something McLachlan considered as “meant to be” but an earth shattering betrayal nonetheless. Its simplicity only heightens its power and positions it as Surfacing’s finest moment.

In “Angel”, a song best associated with the SPCA and one my boss used to play in the car to calm his infant son, McLachlan was inspired by the heroin epidemic to which she used as a metaphor for any escape. Hymn-like and undeniably beautiful, it is her best known song and holds a place in the late 90s zeitgeist with everyone from Santana to Reverend Run citing it with getting them through bouts of depression. Ultimately years later, she defined the song’s message as a call for people to “…not to take responsibility for other people’s shit and…love yourself at the same time.” Which is primarily what the album is about: the blow of failing your significant other washed away by this realization.

However, Surfacing as a whole is plagued by its inconsistency. Deep cuts occupy the middle of the road, fail to showcase the flawless melodies and performances prominent elsewhere, and though hold a similar sense of patience, ultimately lack the vivid sensitivity of the highlights and worst of all any sense of momentum. The lazily titled ambient track “I Love You” is one long bridge missing the payoff of a great chorus that it desperately needs. “Black and White” combines a funk drum break with distorted guitars and scatting into a sonic mess to which McLachlan fails to save by remaining stagnant and failing to adapt.
‍

The success of Surfacing benefitted greatly from the advent of McLachlan’s revolutionary all woman touring show Lilith Fair and rightfully so. McLachlan was disillusioned by the fact that radio stations wouldn’t play two female musicians in a row, so she came up with the festival. Lilith Fair was a harrowing moment for feminism in pop music, a showcase that included artists as diverse as Erykah Badu, Fiona Apple, Tracy Chapman, and Sheryl Crow. Massively successful and innovative, Surfacing was subsequently everywhere though media publications lacked an understanding of the premise and even tried to sexualize the most genuine pop singer at the time. While it isn’t her best album, it’s difficult to deny that the best songs on Surfacing are Sarah McLachlan’s best work in their power of melody. Its sombre tone and lyrical perspective would go on to position it as one of the go to breakup records of the era.