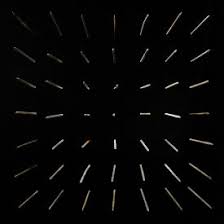 There Existed an Addiction to Blood is a disgusting mess of a record. It's a dilapidated slum, where the rancid odour of dismembered limbs penetrates the senses as they decay on bloodstained concrete. Some might not be able to handle that, but, for those who can, it's the album's most enticing quality.

It shouldn’t have come as a shock; Clipping are far from strangers to horrorcore. The plinky, John Carpenter-inspired keyboards and synths on the lead single, Nothing is Safe, ooze of 1970s horror film music (though I can’t say I remember any syncopated hi-hats in Goblin’s Suspiria score.) But when the crackling, filtered vocals of rapid-fire frontman Daveed Diggs kick in, an overture for the macabre anthology to follow, it’s clear you’ve fallen into something dark. This could have ended out with something schlocky and gratuitous, but Clipping always seem to justify the gore with the quality of their musicianship.

Run for Your Life throws the listener into panoramic paranoia, lamenting the impending demise of a man, you guessed it, on the run. His pursuer? A girl he attempted to womanize, only to discover she was a serial killer. Diggs's vocals take centerstage. Fragments of the beat zip in and out of the mix like cars in the night, dissipating in a mist of ambient noise. It's not till featuring artist La Chat's nightmarish third verse that the beat kicks in full throttle. It's a risky move that could have ruined a great song, but Diggs's impeccable lyricism and the imaginative production of Jonathan Snipes and William Huston's make it a standout.

Like many great works of horror, TEaAtB’s best moments are when it scratches its claws at the social climate. While Blood of the Fang owes some of its effect to the body horror brilliance of its music video, the track is just as bonkers as its complimenting visuals. Diggs’s raises fallen black activists from the dead to engage in a full-scale assault on the scourge of white supremacy. The interpolated Sam Waymon sample brings an added layer of urgency an already passionate call to arms.

TEaAtB uses horror as a vessel to communicate the evil of man. Yes, there are werewolves, there are flesh eaters, but it feels more like the narrator of Desolation Row using a mythical masquerade to disguise the vagabonds and villains of our reality. On this record, Clipping relish in violence. Both the violence of those who wish to destroy and the violence used by people who must retaliate to survive. And in the album's final moments, an 18-minute audio recording of Annea Lockwood setting a fucking piano on fire, Clipping makes us wonder where this bloodlust will lead.

There Existed an Addiction to Blood