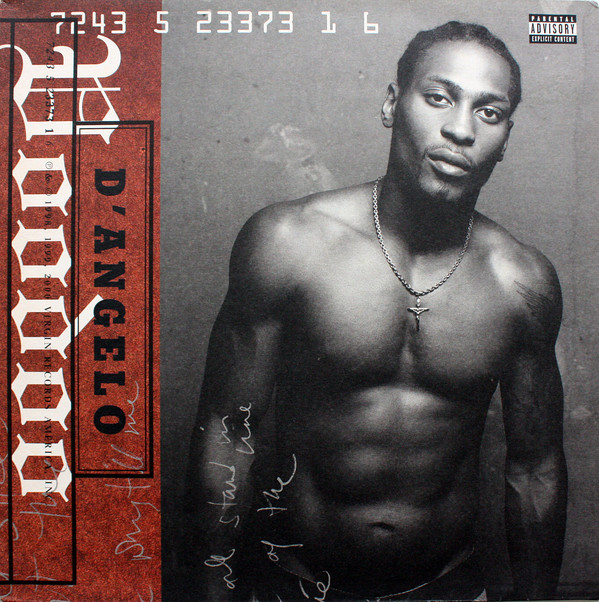 In the late ‘90s, D’Angelo – born Michael Eugene Archer – was hot stuff. As paragon of the Ruffneck Romeos, his debut album Brown Sugar made swaggering strides from soul and funk into hip-hop and neo-soul, knocking out hit singles and platinum status. In that long night’s journey from 1995 to 2000, debut to sophomore, attractive to adonis, D’Angelo fathered two kids, switched record labels, ditched his manager and, most importantly, got busy creating, bunkering down in New York’s Electric Lady Studios with ?uestlove, cooking up the dense and murky masterpiece that is Voodoo.

The very first notes of “Playa Playa” set Voodoo apart from its predecessors as a rootsy production driven by acoustic instrumentation yet marked by the boom-bap of rap and hip hop. The music was unlike the other New Jacks because it eschewed canny beat loops for a live, conversing band. In the spirit of collaboration, legendary instrumentalists like Pino Palledino, Roy Hargrove, Charlie Hunter appear alongside certified street credits DJ Premier, Redman and Method Man in rotating cast to draw on influences of both classic and contemporary black music. The fusion of these elements cemented Voodoo’s relevance, which is why it’s so remarkable that something so contemporary could be so focused on tradition and diaspora.

By titling the album after syncretic West African religious practices, D’Angelo signals Voodoo’s overarching spirituality and connection to heritage. Indelible tracks like “The Line” and “Africa” sing about returning to long lost lands while “The Root”, ostensibly about an old flame, channels Biblical verse “From the Alpha of Creation / 2 the end of all time”. Sexuality abounds on “Feel Like Makin’ Love”, “Booty”, and “Untitled (How Does it Feel)” where D’Angelo ascends to the heights of libidinous forefathers like Marvin Gaye, Al Green, and Prince, artists with fallowed virtuosity immortalized in the musical consciousness. The tracks are spacious, immersive, and so far deep in the pocket you’ll lose yourself and just vibe.

Together, Voodoo’s organic musicianship and otherworldly sexuality makes for an uncanny atmosphere that’s been unforgettable for just about every set of ears they passed through. The thickness conjured by Palledino’s Motown bass lines on “Chicken Grease” and “Send it On”, tailor made for heavy head-bobbing, are simultaneously buoyed by the fleet guitar chording. And despite the seismic talent of these players, it's obvious that D’Angelo is making these guys work fucking hard. Listen to the way the drums on “Devil’s Pie”  hold lock steady as undulating samples whir on top like factory motors in a montage of hustle and grind. The music’s revelry is not effortless, but laboured over and muscular as would be expected from veterans approaching their craft with love and gravity.

All of this is to say nothing of the expressive vocal talents of D’Angelo, master of the monosyllabic, who huffs out each word with precise rhythm and meter. Like the major innovations of gospel music, D’Angelo croons both words and wails into eidolic non-verbals. The layered vocals of “One Mo’ Gin” and “Untitled” render the lyrics nearly unintelligible, and even considering the obscurity of the titles to those not slang-savvy, it’s hardly noticeable as D’Angelo’s voice is so inviting in its warmth and soul its mere gesticulations ripple with pathos.

For many, Voodoo reaches its peak with “Untitled”, the lone single culled from the album. Its tricky opening bars pass over several beats as you almost trip trying to get a feel before it lurches into a sweet melody, backing off again as D’Angelo’s falsetto delivers the album’s most tender moments. As its repeating chorus pours out upon climax, it aspires to be D’Angelo’s “Purple Rain”, achieving redemption and deliverance through “breaking down the walls.” The question “how does it feel?” remains unanswered because, like the album as a whole, its resolution is in the body and just can’t be verbalized.

Despite Voodoo’s posturing as a self-styled revelation, some sort of carnal enlightenment, its popular effect was ultimately to excite the desires as seen in D’Angel’s chiseled body on the cover and the swooning-camera infamy of the “Untitled” music video. Thus, what appeared to be nirvana was really samsara, a perpetuation of suffering and the aimless wandering that would ultimately break the tragic D’Angelo as he fell into a self-destructive cycle of drugs and sex – or so the cruelly tabloid-esque legend goes. Years later, no longer in the grips of greedy A&R men, he would return in 2014 with the purposeful Black Messiah, which replaced the HD modelling of Voodoo’s cover art with a surge of African-American unity spurred on by centuries of antagonism with Powers that B.

That is the great tragedy of Voodoo, what seems to have been brimming with the promise of a new age of R&B where the popular tastes might be whetted for real musicianship was instead perhaps the end of an era, a changing of the guard. Indeed, the silent break up of the Soulquarians seems to have been just that. It may be that Voodoo’s chart success really was just driven by D’Angelo’s diefied physique and industry pressure to become a sex symbol propped up by ego, a burden too much for any artist - or audience - to bear. There’s a sadness in this, which is what makes the dreamy yearning in closing track “Africa” so moving. It’s a final moment of serenity and spiritual clarity where D’Angelo communes with oneness “through all time and history” to realize Sankofa in profound retrospection. So with that said, let’s go back and give Voodoo a listen, libations at the ready as we remember the weird lull of post-Y2K optimism and pre-9/11 naivety only 20 years previous in gregorian calendar time but galactically distant from where we’ve journeyed to since.

Check out our SMACK History Lesson on the making, release, and aftermath of Voodoo