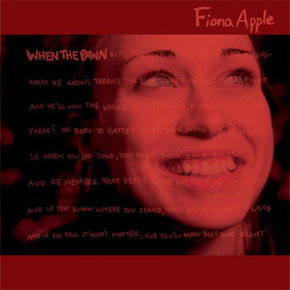 She had thrown an award-shaped rock through the music industry’s far from fragile window. After breaking through to stardom at the age of 18 with the brilliant Criminal, Apple had gained a reputation as the most divisive of a new class of female singer/songwriters dominating the charts.

A deep understanding of jazz through piano and vocal gave her music an ancient quality, which made her equal parts Liz Phair to Billie Holiday. Her debut album, Tidal featured sincere lyricism with songs about love and pain and even about the sexual assault she endured in her teen years sung in unforgettable contralto. And then there was her persona, she was never one to do things under the radar. Criminal had massive reach in its alternative/jazz/r&b sound and a controversial video that slyly depicted Apple, then 18, in a rawly sexual light. Following a press run and interviews that depicted Apple as unabashed if not pretentious, media publications tore her apart deeming her an “excruciatingly silly human being.”

In one of her defining career moments, Apple, accepting an MTV Video Award for Best New Artist, decreed the world as bullshit before cancelling 21 tour dates due to personal problems.  The media wanted to dig Apple a hole and make her stay there. What the mainstream public underestimated was what Fiona Apple, at this point thrown away, would represent to generations of creative youth in her ability to convert pain and angst into cathartic release and raw emotion.

Her next album would be titled When the Pawn Hits the Conflicts He Thinks Like a King What He Knows Throws the Blows When He Goes to the Fight and He'll Win the Whole Thing 'fore He Enters the Ring There's No Body to Batter When Your Mind Is Your Might so When You Go Solo, You Hold Your Own Hand and Remember That Depth Is the Greatest of Heights and If You Know Where You Stand, Then You Know Where to Land and If You Fall It Won't Matter, Cuz You'll Know That You're Right. A 90 word poem. Written in response to unfavorable reactions Apple received from an unflattering Spin profile and deemed a publicity stunt upon announcement, it’s a pretty legible dissolving of negative perceptions others had of Fiona Apple, the pawn. They keep trying to roll you over, be sure of yourself and they no longer exist. “It came from being made fun of and then, of course, it becomes a thing I’m being made fun of for,” said Apple in an interview with Q.

It’s a deeply personal album. Fiona Apple, then 22, wrote the record in the perspective of herself. The hero in question, though in mental shambles and with crippling insecurity is naked in her emotion to the point of fearlessness and a deep understanding of her own pain. Battling within a relationship that seems to be on the precipice of destruction, most of the songs refer to a “you” perhaps never more poignantly put as “you don't know how crazy, how crazy I am.” upon first glance this appears to be a lover but with an understanding of context “you” becomes an unrelenting, judgemental public. In a startling creative leap, Apple figured out more interesting and expressive ways to communicate through lyricism, but wanted to expand upon the sonic limitations of her music.

Cue Jon Brion; a multi-instrumentalist session musician who at the time was well known for his unconventional techniques and imagination in the studio. It was only a matter of time before Brion branched out to producing records for the likes of Rufus Wainwright and Aimee Mann before he got to Fiona (and eventually Late Registration). His imprint on When the Pawn is massive contributing coloured multilayered arrangements as accompaniment to Apple's poetry.

When the record was demo'ed to him, Apple had the album’s 10 track suite written on piano. “I write pretty well, I’m a good singer, and I can play my songs well enough on piano. You’re good at everything else.” Recording her piano and vocals first, Brion layered theremins, bass, keyboards, vibraphone, guitars, drums, percussion, most of which played by himself and conducted an orchestra giving the album a different texture that reached beyond any one genre. Brion himself averted some of the credit he got years after, saying the record’s attention to irregular rhythms and dizzying time signature all came out of Apple’s songwriting.

He’s probably talking about Fast As You Can and the switch from 4/4 bustle to ¾ ballroom waltz is staggering, but thematically personifies Apple’s song that encapsulates how the general public and music industry viewed mental illness before its recent reset.

The quintessential nature of When the Pawn cannot be overstated. From track one, On the Bound, the collaboration of Apple’s songwriting to Brion’s arrangements sweep with diverse flute and band arrangement. Limp plays as a red-hot condemnation of Apple’s partner's attempts to gaslight her. In a clever allusion to masturbation, she threatens to leave him lying limp in his own hand. Paper Bag, thanks to poignant use in Bridesmaids, may very well be the most well known song on When the Pawn, but more importantly a malaise laced dissertation on how Apple views men after a life of wronging. Even the good ones see her as “a mess he don’t wanna clean up,” and the grim part is so does she.

The turmoil of both Apple’s public and private lives spill into When the Pawn’s DNA, leading to a feeling that’s always on the move. On its release, When the Pawn received a mediocre response, with many applauding Apple for creating a more mature work, but still taking what opportunities they had to insult her for being different and outspoken. Now it’s considered a modern classic, a candid reflection of a 22-year old genius who was sent spiraling into the pop world years before.