We look at Eminem’s brutal and brilliant third album on its 20th anniversary and why it still holds up despite being as offensive as it ever was. 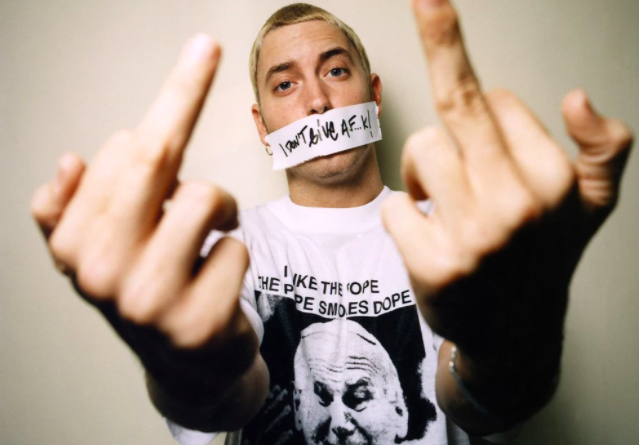 Eminem simply did not give a fuck. On the release of The Marshall Mathers LP, one of the definitive rap releases of the century, he was arguably the most famous man in America.

He didn’t grab your attention, he yanked it. He was unashamedly White, carried an original voice, and his subject matter ranged from domestic abuse, drugs, and devil worship. In tandem with his dark substance and unorthodox aesthetic, Eminem’s displeasure with fame was the breath of originality in a genre that was becoming too materialistic and in need of new ideas. It went beyond hip hop, as Mathers embodied a cynical pariah fed up with the tabloids and the state of pop music in the boyband era. The one artist who connected an entire generation and scared the shit out of their parents was reopening the argument of free speech vs hate speech.

The Marshall Mathers LP came just a year after The Slim Shady LP. Written mostly on tour and in the free flowing drug market of Amsterdam, he responded to his detractors by doubling down with more casualties and more energy, infuriating everyone who didn’t get the joke. Between the media, politicians, and his own mother it seemed half the world were far from pleased. Shortly after its release, Lynne Cheney took to the House of Senate and questioned why an entire industry would honour the work of a man whose material was so hateful. Others questioned whether his fanbase would mistake the album’s dark satire as an endorsement to commit hate crimes. But apart from being more provocative, the Eminem of MMLP is funnier, scarier, angrier, and smarter.

Eminem’s tireless insistence to be hated was essential to his appeal, but none of it would matter if he weren’t the best. His skillset was flabbergasting and likely the most diverse of any rapper…ever. He used different voices and was able to rap in character. His storytelling was unmatched. His ad libs, colourful and innovative. His multi syllabic rhymes, perfect. His imperfect rhymes, flexible. His cadence, uncanny. In two bars he could flip from explosively funny to eerily menacing. The overpowering and gratuitous nature of the album meant important things Eminem was discussing were naturally ignored: the banality of commercial pop music, the hypocrisy of the Clintons, the omnipresence of drugs in White suburbia, reverse racism…

20 years later, the album feels as cataclysmic as it did in 2000, a far less PC environment, but has it aged poorly? initially, any artist would seem baseless to say explosive things in order to achieve notoriety. What protects the album from becoming dated comes from understanding Eminem’s complex nihilistic trap. Between fact and fiction, confessor and satirist, it was the nature of his contradictions that made MMLP difficult to decode and blurred the lines between art and reality. if you believed he hated gays do you believe he committed armed robberies? That he impregnated Jennifer Lopez? Would he kill a Rottweiler?

He famously rapes his mother on the first verse of the record only to make a joke about the media’s interpretation of it immediately after (“We gave him the Rolling Stone cover?”). “Stan”, now a symbol of pre-internet celebrity and obsession acts as a caustic warning in taking his subject matter too seriously. Even the Elton John duet at the 2001 Grammy’s, commonly viewed as a peace offering to the GLAAD protestors who had been picketing the ceremony was just ultimately just a continuation of this reversal.

He followed gay bashes with questioning your sense of humour and bookended three minute shit talks like “Who Knew?” and “Marshall Mathers” with skits depicting baffled label execs chastising the rapper. He was indifferent and self-aware like the comedian who says something outrageous then blames the shocked audience for being too uptight. Did Eminem’s lyrics inspire Eric Harris and Dylan Klebold? Well, according to him they stole his trench coats.

When Jimmy Iovine noticed the absence of a clear hit to propel the album into the mainstream,  Eminem responded with “The Way I Am”, a decree against what was being asked of him and of fame in general. He finally caved with a last minute addition in “The Real Slim Shady”, a meta reimagining of the contemporary American pop song. Released just over a month before the album, “The Real Slim Shady” achieved frequent radio play and MTV rotation. The songs are positioned side by side to emphasize that Eminem made millions off the same system that antagonized him. The strong satirical material on MMLP also legitimized his serious songs, an essential counterbalance to his persona. “The Way I Am” gained extra poignance amongst songs like “I’m Back” and “Kill You”, like the class clown was finally done screwing around.

“Kim”, MMLP’s most controversial song may be the only time the record comes off as truly  repellent. Eminem plays himself and Kim, who despite being a lyrical target, married Mathers between albums. It’s disturbing, emotional, over six minutes, and ultimately ends in murder. While Dre argued for the song’s quality and how it gave its artist an expressive concept, its placement on the album feels questionable. It’s not danceable nor funny nor clever, weirdly sandwiched between two party tracks, and omitted entirely on clean pressings. Still as reckless as he is, Em never sounds full of shit.

The album has undoubtedly aged better than Eminem has. At the peak of the most productive four year stretch for any rapper in history, when he was true to his original ethos of pushing free speech and squeezing under the skin of the establishment the results were magical. Now he’s over-serious, aged, and jaded from a serious drug habit. Most importantly he’s bottomed out on his currency to shock the public. Watching Eminem go after Trump seems like low hanging fruit in comparison to his war against mainstream music.‍

The Marshall Mathers LP is a product of its era not just because it would never get released today nor because of its omnipresence as the fasting selling album of its time. It’s an artifact. Other rappers didn’t follow Shady’s suit and the world got more sensitive. In fact, MMLP is likely more more terrifying to teenaged ears today than it was to pre-teen millennials. Remarkably, The Marshall Mathers LP still maintains its shock value and remains unmatched in its objective because it is as brilliant as it is provocative.