We Gave Grammys to The Grammys

Who gives a shit what the Recording Academy says about what they think the best album of the year wasn’t? We’re just here for Harry Styles’ boas. 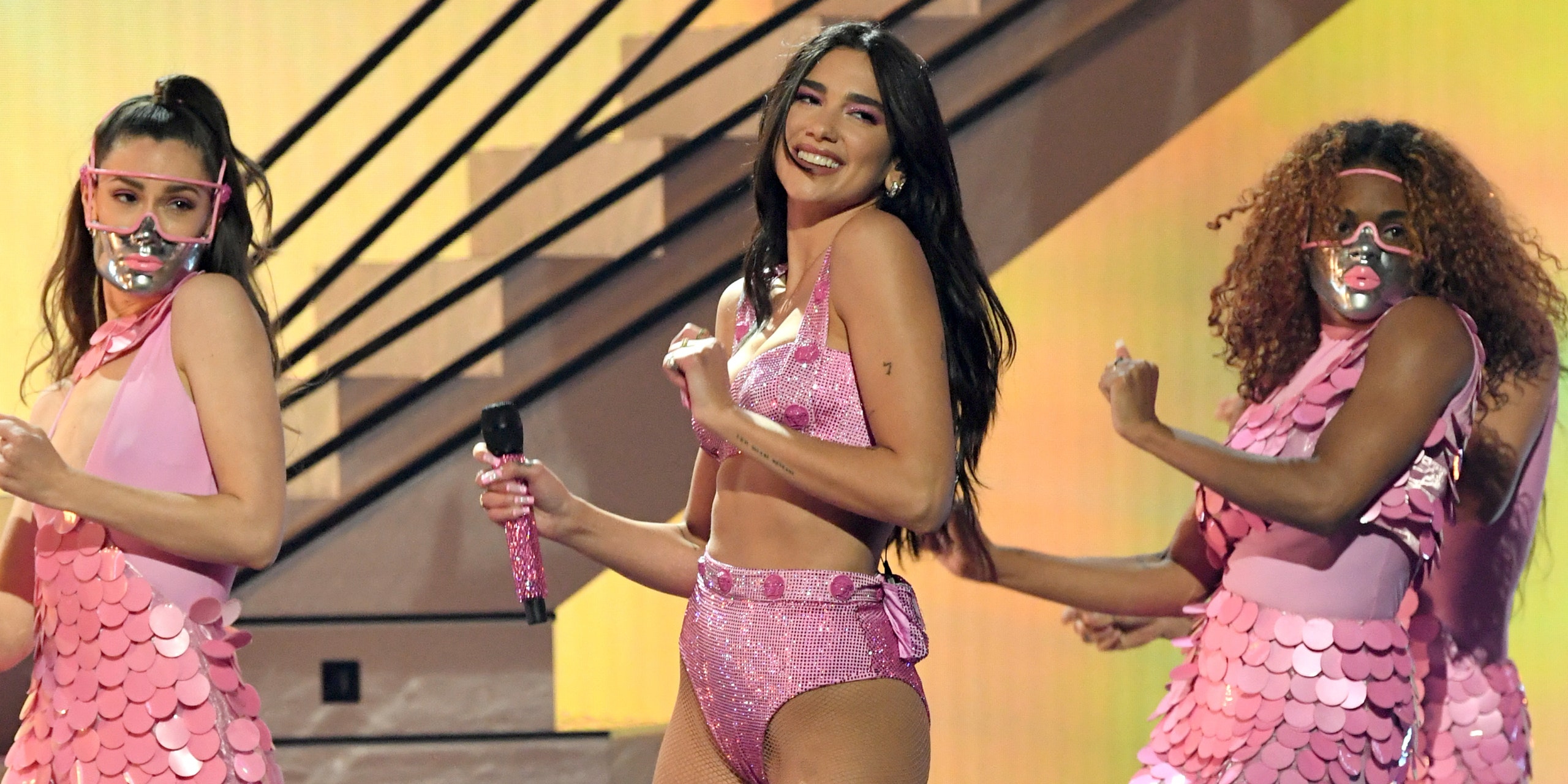 Nobody was there. The location was undisclosed. Half the attendees were outside at dinner tables; airplanes were audible during Beyoncé’s speech. Inside was a celebrity green screen party.

But honestly who gives a shit? It sucks every year. I gave up when Back to Black and Graduation got beat by a Joni Mitchell covers album that was sold primarily in Starbucks. But you know what? ‘”I Don’t Give a Shit Pt. II (with features)”: I’ll still tune in from 3:00 pm-12:00 am and make fun of these schmucks like it’s the Music Met Gala but I’m allowed to watch it.

When I was a kid you would turn the Grammys on and catch Madonna, Kanye, Jay, M.I.A., Jack White, Arcade Fire, Bruce, U2, Radiohead, Amy Winehouse, Alicia Keys, John Mayer, N*SYNC, Nelly, Eminem all on TV playing what they’ve selected as the material they want millions of people to see. That is not the case anymore. Now it’s just the VMA’s via the Oscars really.

So, if the Grammys are irrelevant anyway, we want to award Grammys to the Grammys. The Grammys: where Taylor Swift has 11 and HAIM have zero …that Grammys. But we’ll save our best music picks for end of year. For now, we’ll treat the Grammys for what it is – a carnival show.

Dua Lipa received modest recognition on the trophy front last night, but for about 25 minutes, Dua Lipa was the biggest star on the planet. I literally want nothing more from this mode of performance on Grammy night than what she pulled off. She danced, sang, looked amazing, displayed incredible showmanship and it went off without a hitch. Future Nostalgia may have been shut out of the majors, but with her no-nonsense medley of “Don’t Start Now” and the phenomenal “Levitating,” she cemented her album (just under one year old) as an instant pop classic.

I wanted to tear this apart, but I fell asleep by the end of “Cardigan.” It turns out Jack Antonoff of Bleachers was up there strumming along as T-Swift went through the motions: grief, release, rest, joy, bad dancing & Vanilla singing. If Folklore proved anything, it’s that Swift doesn’t need Max Martin to churn out sincere stories in a nice soprano. We needed Taylor Swift and Justin Vernon playing cool instruments on a dim lit stage, eyes closed so I can understand why the fuck Folklore took top prize last night. Because behind what looked like a Super Mario Kart setting at night in 4K, I seriously do not know.

Since December, Fiona Apple has been vocal of her disdain of the “Newly Woke Grammys” and namely how they tried to subtly slip Dr. Luke (of whose sexual assault allegations were dismissed in 2016) with a pen name on this year’s ballot. The day of the show, Apple posted a video to her Tumblr explaining that her absence is less of a protest and more because the exposure of a major awards show would threaten the success of her sobriety. She then went on to discuss how award shows are media fodder compared to real issues like transparency in court rooms before directing fans to sign a petition that would allow virtual access for court watchers.

For once, the Grammys didn’t screw up Alternative Album (Brittany Howard is not alt but ok I’ll let it go this time). Tame Impala? Phoebe Bridgers? I am ok with this. Fetch the Bolt Cutters is perhaps the greatest album of the past two years in sound, scale, and thesis. An album so good that it revived the Pitchfork 10. The Grammys had no choice but to actually make the right decision when it came to the alternative album category.

Still, the woman who before the age of 20 told the MTV kids that “This World is Bullshit” on live TV, did not show up even virtually. She did not release a press statement today, nor did she comment on her tumblr; there is a repost however:

“Best flex of the night, Fiona Apple winning 2/3 categories (alternative album, rock performance) and not showing up virtually to accept.

On-brand does not begin to describe the genuineness of Fiona Apple.

I do not like “WAP.” I think it sounds like Bugs Bunny made a song with Juvenile, but I get it…singing about your genitals is empowering. My problem was that this was tacked onto a very good “Savage” performance… which was nominated for Record of the Year.

Let’s be real here. This was supposed to be Megan’s night. Cardi was not nominated for anything and her performance was nothing more than a cheap ploy for UMG to use music’s biggest night to keep streaming figures going. This is not a knock on Stallion. Believe me, girl did everything she could from titty grabbing; to twerking; to tap dancing to grasp her Grammy moment. But there it was: cut short by the underperforming “Up,” Bardi in arrogant Madonna “Vogue getup” shaking it up while Stallion did a costume change. Further, the Grammys knew this was going to push clicks and social, so they gave this performance a staggering eight minutes of air... By the time their legs were scissor-locked I was already reaching for another Tylenol.

Best Thing About the Show itself: The Vibe.

I’m a cranky fuck but still credit is due here; they did the best they could and save for the frequent technical glitches, I enjoyed the jam space vibe. It looked good and clearly the Academy had to make up for loss of human responses by shelling out extreme levels of budget on green screen sets. Be that as it may, the freedom for elaborate visuals did make the show better.

Worst Thing About the Show itself: Trevor Noah.

In the running for worst host of any awards show I have seen. Yeah, he was Whoopi bad. Not a single joke landed and his sharp political wit was seemingly buried by management before he could even make it to red carpet. Moreover, the producer’s choice to have performers stand around on stage after killing five minutes in dry ice and lights while Noah introduced commercial breaks, sometimes still singing the hooks to songs just played while artists did everything from giggle, to freeze, to stare in bewilderment...was really hard to watch.

Most Humble Moment: Beyoncé taking a backseat to the new school, showing up and not performing despite being highly nominated to allow artists like Megan, H.E.R., and T-Swift yet again, a chance in the spotlight. Anyway, she still broke the record.

It’s very clear that as a body trend, nice butts are going nowhere.

The pop scene came with it last night uniting the Dream Team ’92 of body positive icons such as Lizzo, Cardi B, Megan Thee Stallion, Alana Haim, Air ‘Yonce and even Dua Lipa earned a seat at the booty table shortly after smashing the “SMACK Media All Legs Award.”

Ultimately, this was a hall of fame night for “The Derrière.”

I thought this was the Grammys.; why aren’t the biggest artists in music doing their own vocals live? Cardi B can’t rap live? How the hell does that work? Fuck Doja Cat’s laser show. I would rather watch a 360p of Eric Clapton Unplugged at this point. If lip syncing is frowned upon for the Saturday Night Live stage, it should surely be outlawed at the Grams. Poor form.

Big Wheels: TINA on HBO and How the Media Romanticizes Abuse
Wall of Rebound: Writing an Obituary for a Problematic Genius
Chemtrails Over the Cancel Club: The Duality of Lana Del Rey
Next