13 years ago today Britney Spears shaved her head, marking the tragic beginning to her downfall and the end of an era for modern celebrity. 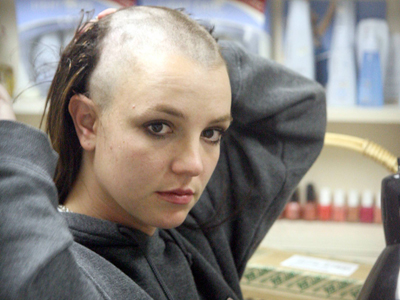 The world had already witnessed Britney Spears’s professional and private life spiral out of control for years before she took matters into her own hands. But when she literally shaved her head bald 13 years ago today, what seemed like a cry for attention, painted by some as an act of defiance, was more likely a cry for help. Nevertheless, the starlet’s tumble from America’s Sweetheart to social skydiver was confirmed nearly overnight. As paparazzi flooded the display window of the now infamous Esther’s hair salon in Tarzana, their cameras caught one of the most shocking scandals and perhaps the first true moment of virality of the modern era.

It was Friday evening when Spears walked into Esther’s and asked Owner Esther Tognozzi to shave her head. After reportedly trying to dissuade the well-established teen icon turned sex symbol of the batshit crazy move, Spears took the electric shears herself after the hairdresser left to take a phone call.

She reportedly enlisted her bodyguards to watch the door and ensure paparazzi couldn’t get photos -- the bodyguards were not successful, with some reporting that it was Spears’ security team who opened the window blinds to clear a view for the media. She admitted herself to various treatment facilities in the following weeks.

Public opinion has since revealed that what news publications had painted as Spears’ fall from grace has retrospectively been recast as an act of defiance, rebellion, and independence. To many, Spears was reclaiming control of her life, something that was dictated by executives and publicists who governed every detail of her appearance since the inception of her celebrity, but in the events that followed, her lack of mental stability became all too apparent.

Born and raised in the “Bible Belt” of the American South, Spears received her first recording contract at the formative age of 16 and was soon knighted by tabloids as the “Princess of Pop.” Not since Madonna (an artist who Spears’ lineage is consistently drawn in debt to), had pop culture witnessed such a complete takeover of radio, video, and social omnipresence. Similarly, Spears would toy with the sexual liberation of her image and her ripe age to enter the media conversation, take control of the youth market, and lead the teen pop revival of the late 90s.

Spears’ music was funky, catchy, delivered in a signature sticky nasally register, and scored her six number one albums. Christina may have had more range, but boy could Spears ever sell a song. And more than twenty years since, her iconic video debut dressed in Catholic school attire singing about the constraints of her loneliness in the prime years of her youth still feels like the kick that broke down the door to a new era of fame and sexuality. It was the spirit of rock and roll disguised as a bubblegum painted wagon.

The reversal and creative interruption began in 2004, two years after her breakup with Justin Timberlake rocked the world and denied fans of the Top 40 royal wedding that never was. Instead, Spears did a 180, married her childhood friend Jason Alexander (the other one) for a quick 55 hours before ultimately marrying her backup dancer, the notoriously aloof Kevin Federline. His ex-girlfriend was still pregnant with their second child.

What followed was a series of highly publicized incidents that plagued the star and shifted the direction of her music. From the get go, Spears was criticized for her choice in partner and tabloids ripped into the couple’s ugly divorce and the ruthless custody battle that followed. With her shoddy decision making skills in full light of the public eye it seemed like everyone wanted a piece of Spears, her label used her name to market a signature fragrance, she was put under heavy medication for two months after she busted her knee during a concert, and even her hero Madonna signed her up for the Church of Kabbalah.

In addition, Spears’ reputation was taken through the ringer when she was berated as a bad mother. In 2006, she was photographed driving with her first-born Sean Preston on her lap and without a child safe car seat; a few months later the 7-month old baby fell out of his high chair and Spears was questioned again by the Los Angeles Department of Children and Family Services. After a well publicized stretch of partying, during which Spears and her exposed crotch were famously photographed with Paris Hilton getting out of a cab, she checked herself into rehabilitation centers on numerous occasions, with some stays lasting as few as 24 hours.

Then came that infamous swinging umbrella. Spears’ hair had barely grown beyond peach fuzz by the time she was photographed unleashing what seemed like years of pent up frustration with the media. Wielding an umbrella, she attacked the car of a paparazzo tasked with chronicling Spears’ erratic exploits.

Back in 2004, she produced hits like “My Prerogative”, a Bobby Brown cover which held the number one spot on Billboard’s Hot 100 and Hot R&B/Hip-Hop Songs charts and the brilliant “Toxic”. One year later, Spears starred in a short lived reality series Britney & Kevin: Chaotic in tandem with songs “Chaotic,” and “Someday (I Will Understand).” Yikes -- still two years out from the head-shave incident.

The infamy hit an apex in October 2007 just eight months after the Esther’s incident, when Spears, now with a full head of hair, released her fifth studio album Blackout. Planned comeback hits like “Piece of Me” and “Gimme More” corroborated Spears’s constant battle for privacy and the price of fame, culminating in a booking that would see her open the MTV VMAs. Marked by her dominance of the same stage six years before, in control with a python around her neck, the 2007 VMA performance full of obvious lip syncing and sloppy choreography was universally regarded as disastrous. Just a month after, Spears lost custody of her children to Federline. The reasoning behind the verdict was not disclosed to the public, though police invaded her home and reported she was under the influence of an unidentified substance. She was admitted to a medical centre, placed on involuntary psychiatric hold and soon after the permanent conservatorship of her father, giving him complete control of her assets.

Though half a decade later, it seemed like she had taken considerable lengths to bounce back with a well received four year greatest hits residency in Vegas and retroactive views of Blackout as an important pop album. However the saga of disaster continued and just last year, Spears was admitted to a mental health facility. But whether Britney Spears truly survived the debaucherous events of 2007 may be subject to debate and aside the point.

The head shave not only marked the moment the artist, once the most promising was ruined by the exact machine that launched her career. It was both the end and beginning of an era for modern celebrity. Perhaps the true exploit of a new type of tabloid journalism, it seemed that anyone with a blog could latch onto the misfortunes of celebrities with a cheap aesthetic and middling sources like Perez Hilton, TMZ, and even youtubers like Chris Crocker (who famously defended the star) could attain new levels of fame with low efforts. Britney Spears was doomed by the system that created her and stripped her of any shred of private life with damaging effects. It’s an important moment in rock history since it was on the cusp of the advent of social media, signalling the end of privacy for us all. It’s a shame that Spears had to go first.

Where Drake Puts His Money
All Four Animals Tony Goes Crazy Over on The Sopranos and What They Mean
Cancel The Real Enemy: The Vindication of Sinead O’Connor
Next