53 years ago today, Mick Jagger and Keith Richards became the first pop stars to get caught with narcotics and sent to prison. 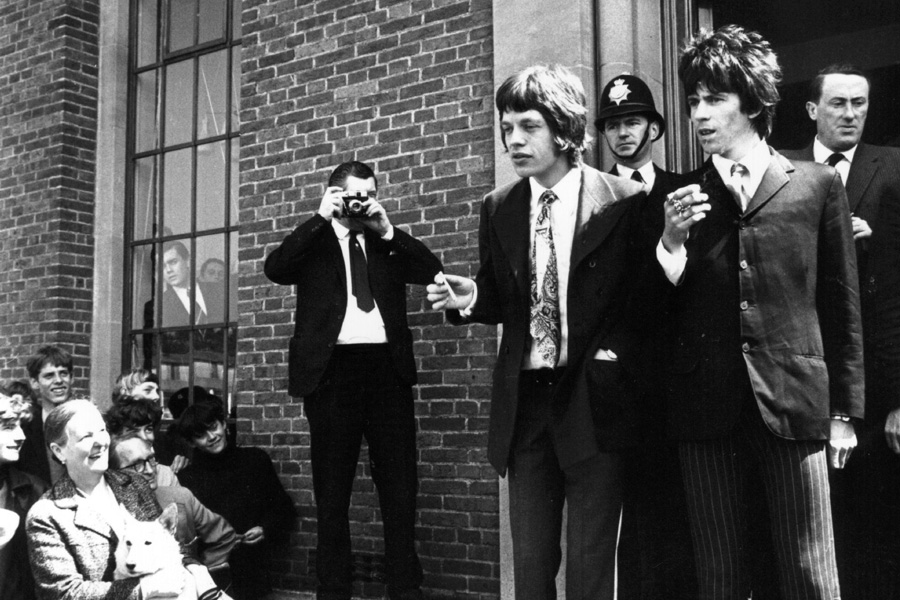 It’s one of the best and most famous stories in rock and roll folklore.

To say The Rolling Stones were coming off a hot streak in 1967 would be an understatement. They had earned a seat as the biggest touring act in the world and the first great band whose music was predicated on a bad boy image. Coming off a string of well received renditions of American blues, “The Last Time”, “Satisfaction”, “19th Nervous Breakdown”, and “Paint it Black” represented a turning point for the band. They were the first singles written on their own, all shooting to the top of the US and UK charts and immortalized Jagger Richards as not only the best songwriting team in rock and roll, but The Rolling Stones as the hottest band on the planet.

The Stones had yet to run into any singular controversy, but the group’s contentious image fuelled by very public partying, a vested interest in boozy American music, and sexualized lyrics had the British establishment fearful of their influence on the country’s youth. Notorious British tabloid News of the World ran a three part feature called “Pop Stars and Drugs: Facts that Will Shock You” describing wild LSD parties attended by The Who’s Pete Townshend and Cream’s Ginger Baker to name a few.

While the first article targeted Scottish folk pop singer Donavan, the second planned to hit The Rolling Stones. The reporter responsible had spent an evening eavesdropping at Blaise’s, a posh London club where members of the band, namely Mick Jagger allegedly took Benzedrine tablets and smoked hash. Two days later, when it became clear that the reporter had mistaken Brian Jones for him, Jagger filed a defamation suit against the paper.

Jagger, Richards, and their art dealer Robert Fraser were charged with drug offences. Marianne Faithful, considered Britain’s sweetheart with four top 40 hits, was present though not charged, yet received the biggest backlash. The paper reported with particular gusto that a freshly showered Faithful had greeted the police in nothing but a fur rug. Her career never survived the wrath of tabloid rumours and her name was forever connected with the Redlands scandal.

Toronto born failed actor David Schneiderman, otherwise known as the “Acid King” was also on site, supplied the band with LSD, vanished before the arrest, and was later revealed in Keith Richards’ autobiography Life to be a police informant responsible for the ordeal. Richards said earlier in 2003, "When we got busted at Redlands, it suddenly made us realize that this was a whole different ball game and that was when the fun stopped. Up until then it had been as though London existed in a beautiful space where you could do anything you wanted." Richards believes to this day that Jagger’s defamation suit against the paper was the catalyst that set the police on them.

Band manager Andrew Loog Oldham, instead of devising a strategy and hiring legal help and public relations firms, fled to America out of fear of being arrested. In walks the infamous swindling Allen Klein who seized a particularly vulnerable moment for the band, hired a publicist, and found them an attorney. It was Klein who told the band to fly to Morocco to avoid press attention. Later he would screw the band out of millions of dollars in publishing rights.

In May, Jagger and Richards were taken to court in connection with the Redlands charges. Rhythm guitarist Brian Jones, whose girlfriend had just left him in Morocco for bandmate Keith Richards, had his house raided on the same day and was arrested after police found cannabis. Now, three of The Rolling Stones were facing drug charges with a maximum of 10 years, putting the future of the band in jeopardy.

The trial was overseen by Judge Leslie Kenneth Allen Block, the chairman of the bench who clearly revelled in the opportunity to put Mick and Keith behind bars. After being called “a menace to society,” Richards famously replied, “I’m not interested in your petty morals.” Judge Block gave him one year and sent him down to the cells without expression for allowing cannabis to be used on his property. Jagger received a three month prison sentence for possession of amphetamine tablets that he purchased in Italy.

The charges brought an unexpected amount of support from fans and the community. The Who rush released a single featuring covers of “Under My Thumb” and “The Last Time”. The Times’ notoriously conservative editor William Rees-Mogg surprised readers when he issued an essay on the subject called Butterfly on a Wheel, pointing out that Jagger had been treated unfairly for a first time minor offence. This caused a major public outcry and was widely believed to have saved the band. Mick did three nights in Brixton, all of which reportedly were spent in the infirmary and Keith was sent to the infamously rough Wormwood Scrubs for one night before they were released. Miraculously with little explanation given to the public, Richards’ sentence was overturned and Jagger’s was reduced to a conditional discharge. Brian Jones received a 1000 pound fine and was put on three years probation. The bust did little but to enhance the band’s reputation.

And that’s why people love to talk about The Redlands Drug Bust, not only did it cement The Rolling Stones as the premier bad boys in a relatively new genre field, it was the next stage in the chastising and stereotyping of rock and roll by traditionalists. The Redlands drug bust ultimately gave us the affirmation that rock stars were being targeted by the establishment out of fear over their influence of the nation’s youth, which continues to be a common thread in the world of pop music to this very day.