When Kurt Cobain and RuPaul Met at the 1993 VMAs 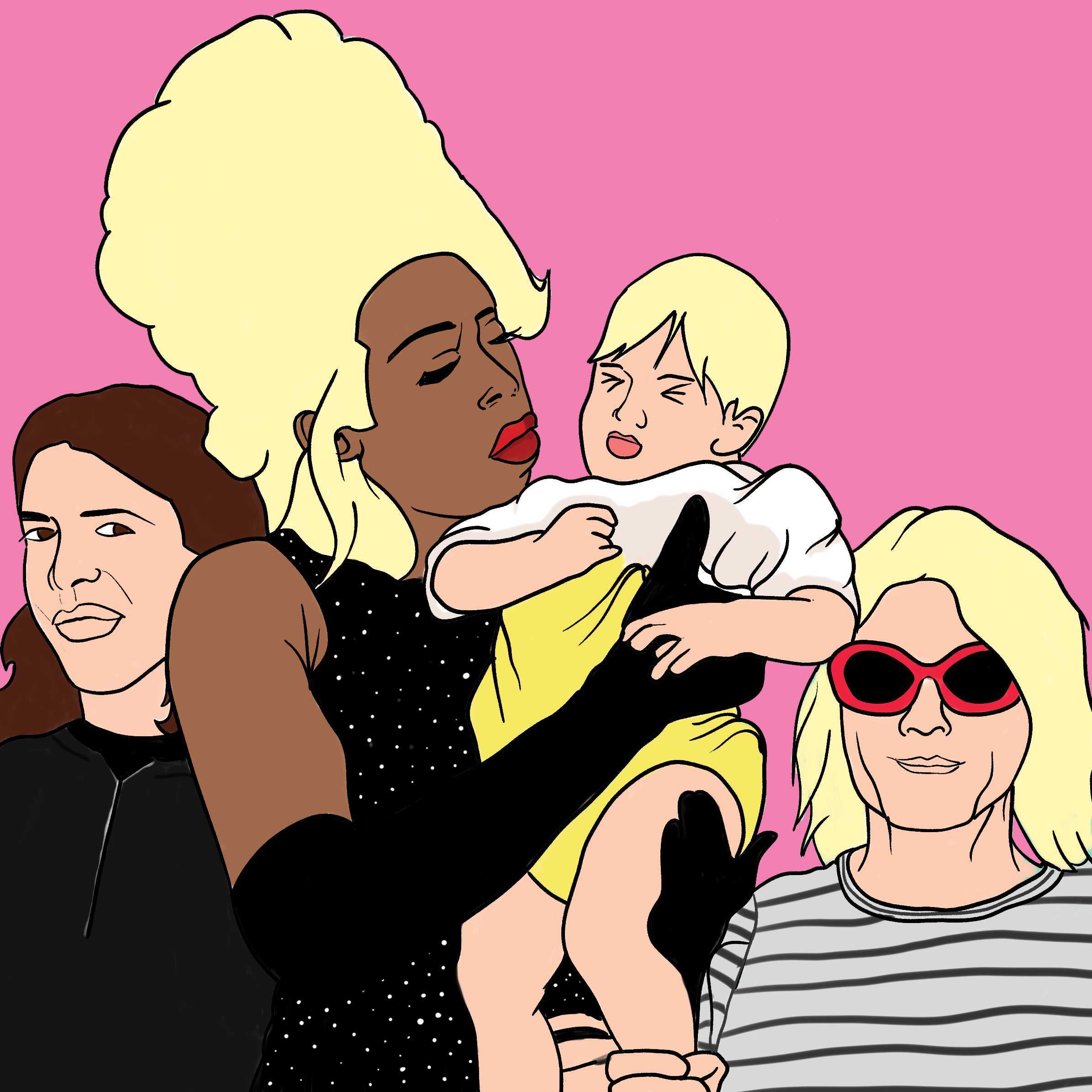 Kurt Cobain knew a photo opp when he saw one.

Upon finally meeting at the MTV Video Music Awards in 1993, Cobain’s impish smile creaked for flashing cameras while his new friend RuPaul cradled his less new baby. The man who had subverted a genre that was on the verge of being unsubvertible, who rarely gave a straight interview knew that a good joke is always based on the unpredictability of its punchline. What Cobain likely did not know, seven months before his death when the photo was taken, was the image’s lasting impression and how it would eventually be seen by millions upon millions of people. The idea frankly would have upset him.

Kurt also likely had no idea that the photo would continue to confirm his already extensive endorsements of progressive politics and gay rights for a generation that was too lazy to read; he was just excited to meet the most famous drag queen in the world. The accessibility of forums to support mainstream celebrities and their political views was incomparable in the 90s and “viral” was merely a medical term. MTV was enjoying the splendours of an 80s grabbing hold of youth culture and the VMAS, their annual event, (somewhere between an awards show and an arena party billed with massive music acts) was in its tenth incarnation, creating must see TV out of the explosive pop music and the celebrity culture that surrounded it.

Nirvana did not show up to the VMAs to play. Just a year before they had caused a ruckus with their stage dive lineup and false start of “Rape Me” which quickly kicked off into “Lithium,” they weirdly attended the night doing little more than hanging out, reacting to performances, and accepting the award for Best Alternative Video for “In Bloom,” their sole nomination of the night. Even without performing Nirvana seemed adamant to make their entire audience do double takes.

It would have made sense for Nirvana, a band at the peak of their commercial powers on a night that their fans would surely be tuning in, to take the stage. They had finished recording sessions for In Utero in February and the record was about a week away from release. The promotional circuit looked breakneck if not lacklustre. “Heart Shaped Box” had just been released in recorded form, with the band giving the single to college and rock radio stations, but not Top 40 radio. Garbage and Smashing Pumpkins FM super producer Butch Vig who helped make Nevermind one of the most accessible alternative records of all time was replaced by post-hardcore icon Steve Albini and the record’s material was decidedly more abrasive, more sad, and contained less traditional pop structures. Geffen Records called it “unreleasable.”

The imagery associated with In Utero’s lowkey publicity approach was decidedly morbid – death, retro diagrams of the human anatomy, fetuses, and the crucifixion dominated promotional materials. Its second single was the aptly titled “Rape Me” attached to the reflective “All Apologies.” Wal Mart and Kmart refused to sell it citing lack of consumer demand and a mismatch to the merchandise mix respectively. None of this seemed to phase Cobain who told Jim DeRogatis that he was “totally comfortable” with low sales projection since Nirvana were so happy with the record. He wasn't the only one pushing boundaries though.

Aligning Kurt Cobain’s fandom of the then-cutting edge drag and ballroom cultures with his progressive politics is the easy route. The entire embodiment of what Kurt Cobain does, how he dresses, his candor in interviews, and the subjects of his songs is defined as a middle finger to the establishment, all the while remaining inclusive. Drag’s ideals are not unlike punk music’s. Punk’s central ethos of subverting the laws and norms of a culture doctored by the establishment tackles the same principles that Drag Culture uses to defy heteronormative standards. Drag’s parody and deconstruction of gender norms as a response to a culture that was moving in an ulterior direction in Reagan’s 80s is very similar to punk’s revocation of the British class system or the American pop charts during the 70s, AND grunge’s protest to the hair metal that was taking over American rock music pre-Nirvana.

But while the “Crying Frances Photos” provokes discussion regarding how Kurt Cobain and RuPaul were not that unalike, it would have been difficult to even give them a glance and without thinking of “Strange Love.”

Courtney Love had just had Frances a bit over a year before. At the urging of her manager was had mainstream publicity for Hole in mind, Courtney Love gave an interview with Vanity Fair, receiving her first taste in media exposure. The American press were hungry to get inside news on Nirvana, Kurt Cobain, and his new wife (who people knew very little about) in the mania of Nevermind. The article infamously outed the Cobains as heroin addicts and alleged that Love had used while pregnant. Love asserted that she was misquoted and that she had quit using during her first trimester upon finding out she was late. She would eventually go on to explain that the article had serious implications on her marriage, then six months and her husband Kurt’s mental state after they were investigated by the Department of Child Services and were temporarily revoked custody of Frances.

Years later, with Frances Bean Cobain healthy & giving an interview on Ru Paul’s podcast “What’s the Tea?” a year before Courtney Love appeared on Drag Race to commemorate the 26th anniversary of Cobain’s death, the conversation is now dominated by the peculiarity of the scenario: What Nirvana, the Cobains, and RuPaul discussed upon meeting.

Ru explained in an AV club interview after being reshown the crying Frances Bean Cobain photo, “These kids come from the same irreverent, hippie and bohemian mentality that I came from. So of course they’re going to gravitate toward what I’m doing. And a lot of people don’t get that. A lot of people don’t have that computer program to understand what that is, that irreverence, that wink that drag.”

Of course, things have shifted dramatically with RuPaul’s drag race in its 13th season and dominating competitive reality TV. In 1993, RuPaul was cutting edge, globally known but with less power than he holds today. He had just released his album Supermodel of the World in June and with it novelty single “Supermodel” providing a striking contrast to MTV’s slate at the time (Pearl Jam’s “Jeremy” took home Video of the Year in ‘93). A major talking point that summer, “Supermodel” became a sleeper hit, a drag dancefloor anthem packaged with B-52 adjacent kitsch and took Ru to the VMAs for a Best Dance Video nomination.

Not much is known about the interaction save for retellings from RuPaul and Frances Bean Cobain who is assumingly getting details from her mother. Cobain told Ru that he “had come to see his nightclub act in Seattle but got there two hours too late” completely missing the 10PM start time.

The Cobains were noted fans of drag culture, giving support to “Supermodel” that Summer in interviews and hiring drag nannies to clean their homes. On “What’s the Tea,” Frances Bean told stories of various nannies in the Cobain home. When Frances bean describes one of the nannies who dressed as Miss Piggy, Ru immediately identified her as Loretta Pig from New York and explained that Kurt and Courtney were avid drag fans.

But while this may explain the “Crying Frances”’ virality, the power of the photo extends beyond the fame of its subjects. While the idea of a drag superstar on MTV was perhaps the biggest takeaway to the photo in 1993, it cannot be overstated how revolutionary it was for a straight rock star to question gender or speak out against toxic masculinity and homophobia. Cobain’s love of drag is fairly surface to his overall perspectives on gender and sexuality. He has referred to his femininity in childhood which led to wearing women’s clothing, he was a career long advocate for LGBTQ+ rights, notably opposing the 1992 Oregon Ballot Measure 9, and gave exclusive interviews to gay magazines like OUT and The Advocate. Nirvana famously added a disclaimer on the liner notes for Insecticide: “If any of you in any way hate homosexuals, people of different color, or women, please do this one favor for us—leave us the fuck alone! Don't come to our shows and don't buy our records.”

A small friendship did blossom after the VMAs. Nirvana and RuPaul were reunited just three weeks later on a Charles Barkley-hosted episode of Saturday Night Live and the band made appearances on RuPaul’s talk show for a Holiday episode, but it was short lived as Cobain’s heroin habit and mental state were spiraling and he would take his life the following April. Now, with RuPaul arguably holding more cultural relevance than Cobain or Nirvana, the picture will likely make its way back, recirculating through your social feeds, but it was the progressive mindedness of both Cobain and RuPaul that would ultimately give the image cultural brevity.