…and blaming her feel good direction is seriously missing the point. 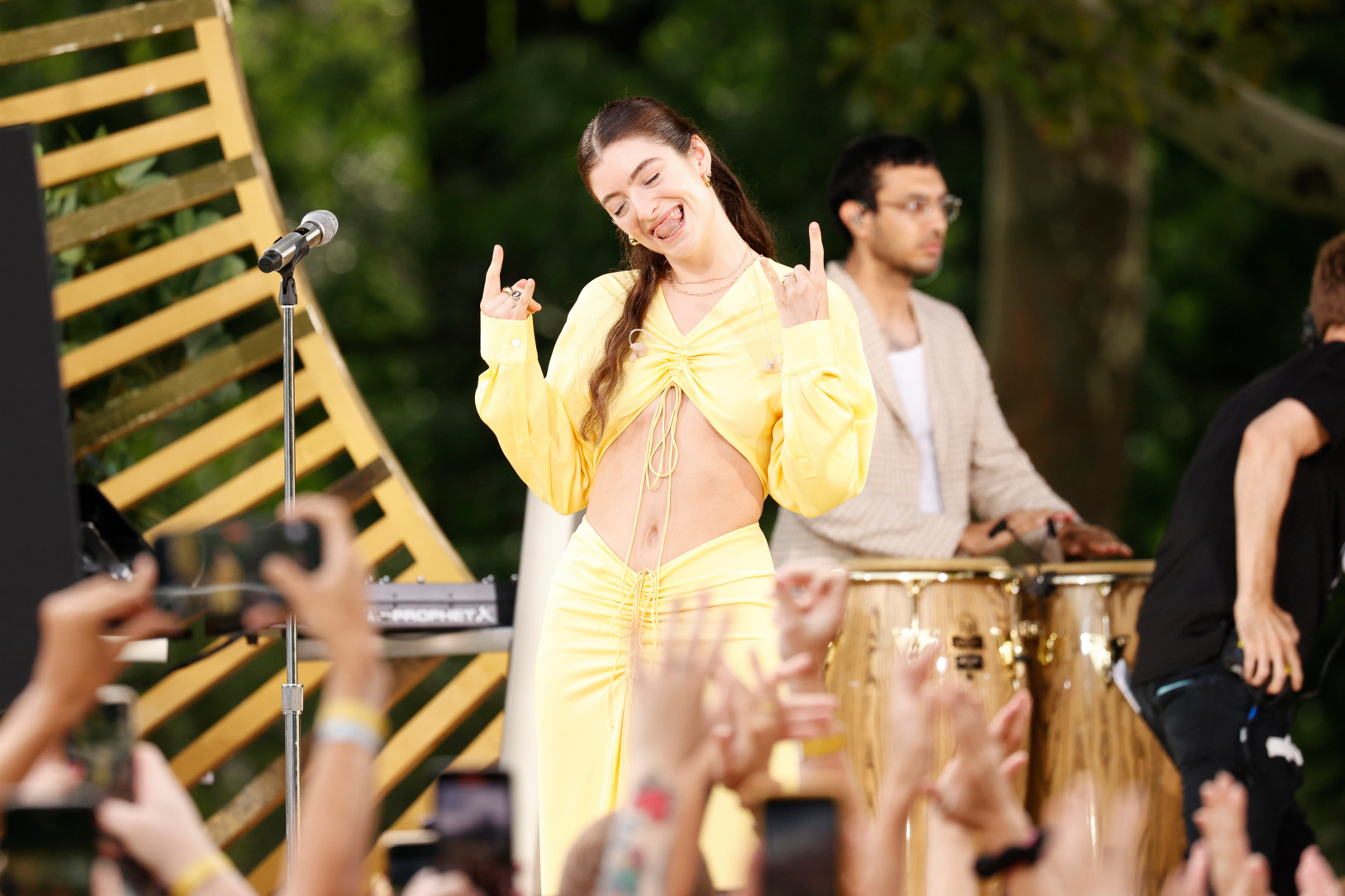 Can any of us write off the new Lorde without looking like total assholes?

Melodrama was always going to be difficult to top. I spent months in total awe of its sound and with real connection to its subject matter. After Lorde created intense traction with 2012’s Pure Heroine and a reputation as an auteur on the strength of her vocals, production, and songwriting with just a single album, the stage was set for her sophomore, and she heroically delivered. The songs seemed weirdly perfect for how risky their structures were as stark piano arrangements or dancefloor material…yet were likely too morose to play at parties. In other words, it was party music for the worst party in the world.

So, it would make sense for one of the perennial artists of her generation Lorde, who is at a ripe stage of her career, to try something else that would be different or at least interesting. Billboard analysts will call it a rebranding, fans will call it an era; whichever you choose it’s very clear that Lorde is going in a completely different direction then the titanic shimmer of Pure Heroine and the cold empowerment of Melodrama.

With “Solar Power,” and its album Solar Power, Lorde seems to be breaking free from the constraints of making music for recovery, the sometimes anthemic, always reflective songs about breakups, self-realization, and drug comedowns that defined her career… but on “Solar Power,” both the album and its lead single, there seems to be no catharsis, no epiphany, no struggle. The realization… go outside because the weather is nice.

Lorde’s new creative direction has become somewhat of a touchy subject in music discussion circles with very little middle ground in the discourse. People on one side are angry that they didn’t get the Lorde album they wanted and on the other end are people so vehemently disgusted that anyone might criticize Lorde for maintaining control of her own art, they might suspend their standard in a bid of defense.

Pointing a finger at Lorde or Ella for wearing a yellow dress and spinning around a sunny beach is pretty reductive. Lorde has always been in charge of her work & the creative direction of her music and she’s a 24-year-old woman for Christ’s sake; in other words, this is perfectly normal behaviour. On the other hand, Lorde fans need to expect more from their favourite artist who is much more than just a pop idol. Lorde built a career by servicing her audience with music that’s challenging, brave, and clever. Her introductory single to the new phase of her career, “Solar Power” is none of these things. Almost profane in its simplicity, the song’s callbacks to everything people speculate from “Freedom ’90” to Nelly Furtado’s early work is nothing but indicative of its thematic shallowness.

Now, it’s not like Lorde’s previous lead singles are hard to listen to, but they’re serious left turns from the grain of pop music during their respective periods, structurally, but also in theme, brilliantly using metaphor in two very different ways. “Royals” was the first song she ever released, juxtaposing heavy bass with harmonies and comparing the Medieval class system to materialism in industry pop. It was everywhere in 2013 and put Lorde right in the middle of the cultural conversation at the unfathomable age of 16. “Green Light” uses the flow of traffic to symbolize an allowance of release and the next stage of your life after personal loss or change cementing Lorde as a generational voice of considerable power. ”Green Light” and Melodrama were universal in their appeal and Lorde was recognized for her realism, moods, and skills as a producer.

“Solar Power” is about a summer’s day... that’s it. Just a summer’s day. Well, “turn of the century beach side optimism” as Lorde told The New York Times. Gone are the black city skies full of uncertainty and anchored by blinding lights, in comes gentrified beaches, swank beach towels, and Cacti seltzer.

Lorde spends the incredibly brief verses explaining how the likelihood of her attending something is increased by good weather before a very deliberate reference to A Tribe Called Quest’s “Can I Kick It?” On paper, this sounds probably about as stupid as it should and “Solar Power” is not a song that begs to be written about (which is honestly a part of the problem), it begs to be consumed for your enjoyment or confusion and then listened to again or discussed. But it should be clear that the smarter people in the room aren’t just pointing the finger at Lorde for making something different, it’s that “Solar Power,” “California,” and perhaps most of all “Mood Ring” are so antithetical to what established Lorde as such a generational genius in the first place, in how profane they are in their simplicity and how careless they treat their subjects; their structures are passable and their melodies familiar.

A lot of Solar Power feels right at home with mid-2000s radio which is to say Starbucks in 2006 which is to say on a shelf for you to glance at while you wait for your venti with nine specifications and a misspelled name, which is to say kind of dated now. In a way, Solar Power sounds like the parody of a pop act that the old Lorde would be villainizing (in a very weird movie that I would very much watch).

That’s the key to our disappointment behind Solar Power. Lorde’s third album and first in four years vies for a standard of considerable height coming from someone who helped create the industry template used by edgy futuristic pop singer songwriters like Billie Eilish or Rosalía. It’s why all eyes are on Lorde to see how she approaches this new era.

It's more than just a style shift; Lorde’s interview cycle for Solar Power from New York Times to Hot Ones very clearly expresses her affinity for independence and a strong desire to take the lax approach after the relentless attention received after Melodrama, its global stadium tour, and things as remedial as celebrity friendships and civilian boyfriends. It all screams “New Me:” She’s gone blonde, her album cover is harmless yet can’t be shown on television, she revealed to NYT that she took a week off after release for a beach get away (sheesh we get it you like the beach), she’s playing halls and theatres though could sell out an arena in an instant, and her desire to have an ecofriendly digital only album after her moral awakening in Antarctica has taken her out of contention for Billboard competition. Different yes, but no reason to point the finger. In fact, aside from the obvious musical style shift, even the sillier behaviour we’ve seen Lorde exhibit this year is actually nothing new. There’s just no serious music to juxtapose her quirky persona. Now it’s just Sheila from the office who loves keto meals and the odd meme but with a mike and a deal.

Wow. Maybe Lorde never gave a fuck and has just been living her life this entire time. There is something empowering about saying, “I run the show. I want to make some very palatable soft favourites, deal with it” and maybe in the way “Green Light” was a very real experience for Lorde, “Solar Power” is just Lorde’s eat pray love journey into finding balance in her life.

But we have the right to expect things from Lorde and the artist seems to be gravitating away from her art and closer to her lifestyle. She’s skipping the splashier TV outlets in favour of Good Morning America. Her verbatim cover of Natalie Imbruglia’s “Torn” and residency with late night slimeball James Corden put Lorde in closer line with One Direction than the female Frank Ocean. Worse, this is narrowing her once universal audience in its overt lack of risk.

Lorde’s out of touch comments on how this was intended to be her “weed album” after realizing that it could no longer be her “acid album” is nonsensical after one listen, which plays nothing like stoner and a lot like Grade Nine Stoned, giggly and hoping your mom won’t find out.

Maybe I’m missing something. Is subversion even a thing anymore? When does it stop being challenging and simply constitutes trolling? Don’t forget that THE SUBVERSION OF POP MUSIC AND POPTIMISM IS INTEGRAL TO LORDE’S MUSIC and a space for her ideas.

"I love writing a pop melody, there's nothing better,” she told Sean Evans, “for it to be simple but secretly complex and to kind of trick the brain. You can't fake it, it's a real experience. That's kind of what it is for me, that feeling of being able to talk to a lot of people, and to make something that's kind of highbrow but can be enjoyed in really simple ways.” Lorde’s ability to achieve this in her own lane up unto this point is why it’s disappointing to see her do something this cookie cutter. Her heroes like Annie Lennox and Prince also never did the same thing twice but by subverting their own formulas; I don’t know if Lorde can create art that’s subpar to everything she’s done and then write it off as “doing her own thing.” Doing something you haven’t done before isn’t evolutionary, despite it being personal.

Now pardon me while I use Melodrama’s epic mix and key changes for badly needed healing purposes.

Oh, and one last thing on this Jack-Antonoff-runs-a-female-singer-stable and Lorde is basically his secretary thing as someone who clearly didn’t get a lot out of this album:

Shut the hell up. Antonoff has been in the picture since 2017 and no one had a problem when they made the second best album of the year. The difference in creative direction if any indicator shows Lorde is the person in charge. Antonoff did his job replacing that towering synth space station with natural instruments and soft guitar picking (much to my dismay). People who enforce a differing narrative have little understanding of what a producer does and why someone like Jack Antonoff is seeing an unfathomable amount of success and productivity.

It’s pretty unfair to apply this to Lorde when Taylor Swift has paid ludicrous sums of money for Max Martin who wrote fucking “Baby One More Time” and “I Want it That Way” and Bon Iver who has nothing to do with her world to work their magic while still maintaining her status as an artist with a lot of agency. Further, there are a lot of very notable collaborators on Solar Power: Robyn, Phoebe Bridgers, Malay, and Clairo. Despite all of this, I still don’t like it.

The Polaris Prize Ceremony is on Monday and 8 of the 10 Nominees are from Ontario
When Kurt Cobain and RuPaul Met at the 1993 VMAs
Touching a Nerve: How TV, Film, and Music Adjusted to 9/11
Next