How a bad movie and its soundtrack inadvertently told the future 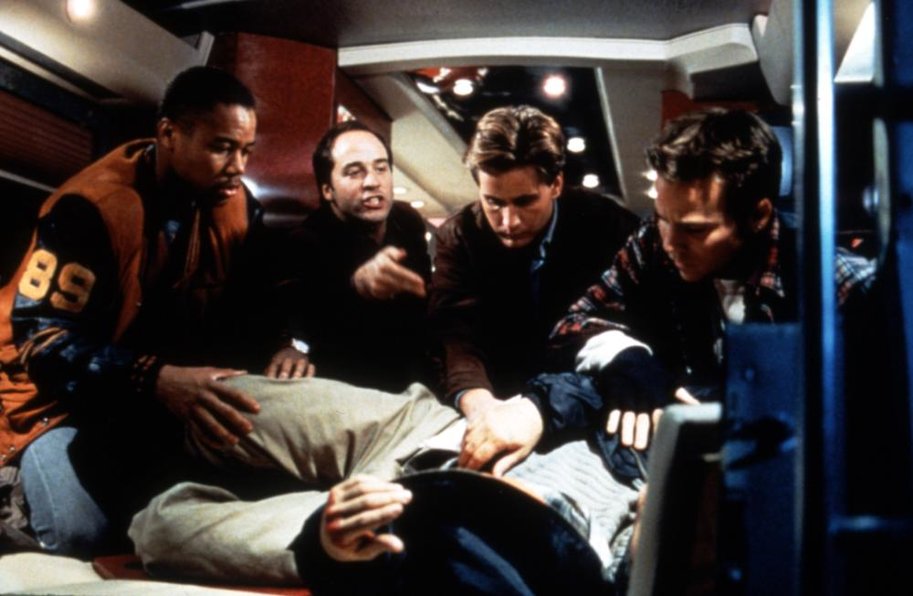 “Urban suspense drama.” This was the term used to promote the movie Judgement Night (1993). The film seems like it was written to try and match that vague description. Similarly cobbled, the soundtrack was advertised as rap-rock’s full length debut. Superficially the film and soundtrack live up to the marketing hype. However, beneath the surface lies a much more interesting story. The film and soundtrack expose the realities of a rapidly changing America and culture that not only foreshadows the upcoming rap-rock craze, but heralds the sound of a gentrified America.

Judgement Night tells the story of Emilio Estevez’s Francis “Frank” Wyatt, a suburban chump who leaves the sanctity of his suburban life outside of Chicago to voyage into the inner city for a boxing match with his boys (played by Cuba Gooding Jr, Stephen Dorff, and Jeremy Piven). They try to take a short cut but get lost on the Southside of Chicago and immediately witness a murder committed by Fallon (Dennis Leary), a gang leader who proceeds to chase down these witnesses no matter the cost.

The picture opens with serene shots of suburban life to the sound of “Fallin’” by Teenage Fanclub and De La Soul. Unlike the rest of the soundtrack, it’s light and breezy. It has a sense of fun and it’s not too self-serious. The rest of the soundtrack is all performative aggression by artists mostly talking past each other, the parts greater than the whole, highlighted by combinations of rap and rock luminaries like House of Pain and Helmet, Sir-Mix-A-Lot and Mudhoney, Onyx and Biohazard, and so on. Most of the soundtrack is a clear predecessor to rap-rock with its chugging guitars and blunt shouts. Nevertheless, “Fallin’” might have been the most prescient song on the album, presaging the Urban Outfitters-clad, Pitchfork-driven youth culture of sanitized hipsterdom that spread from Brooklyn out between the late 2000s and mid 2010s, and whose adherents pretty much only listened to hip hop and indie rock.

The first step in connecting Judgement Night to the sound of sanitized hipsterdom is that they are both related to gentrification. After the white flight of the ‘50s and ‘60s left the inner cities of America in a state of urban decay throughout the 70s and 80s, the 90s arrived with its endless prosperity, its cultural liberalization and its end of history to start the reversal of white flight with the beginning of urban redevelopment. Judgement Night is the story of how these wealthier suburbanites, sick of their boring, privileged, and effeminate [B1] lives, went into the trenches to prove their virility and re-colonize the city for themselves – at least this is how the movie sees it. The soundtrack also sees it this way.

Frank and co. are unwitting trailblazers of urban renewal, and rap-rock is the sound that unwittingly parallels this process. It is the sound of the suburbs, or more accurately, the sound of how the suburbs imagine the inner city[B2] . Rap-rock develops over the course of the violent first stages of gentrification. The performative violence coming from this suburban sound parallels the urban violence engendered by white suburbanites with the power of capital and the state in displacing black and other marginalized groups to pacify the inner city through violence, to create space for start-ups, coffee shops, and glasses stores. Simply put, the colonial aspect of our protagonists’ quest is soundtracked by the rap-rock sound that dominated airwaves when the real-life acts of gentrification were taking place.

The second step in connecting Judgement Night to the sound of sanitized hipsterdom is that they are both products of pure commerce. Happy Walters was the unwitting mastermind who through shrewd business acumen accidentally created a cultural artifact that would resonate decades into the future. Happy, at the time of overseeing the Judgement Night OST, was a young, up-and-coming music mogul who founded Buzztone Music and Immortal Records. At that point he was either managing or had signed acts like Cypress Hill and Korn. He became attached to the project after Everlast, at that time a member of the Waltersmanaged House of Pain had secured a speaking part in Judgement Night.

Walters, realizing the potential money to be made, turned both the soundtrack and the film into vehicles for Everlast. He then had a second great marketing idea: alternative kids like hip hop and vice versa. So why not expand the potential marketability of the soundtrack by combining rap and alt-rock names over a full album?

Happy then starts working the phones. He pairs his signees Cypress Hill with alt rock giants Pearl Jam and Sonic Youth.Happy was confident that “alternative kids (would) love Judgement Night” and that hip hop fans would “probably not jump all over it but [that] they will be pleasantly surprised.” He was right, the album reached number 17 on the Billboard 200 and graced thousands of young boys’ bedrooms before being cast off into record store bargain bins for decades to come.

These choices reveal the explicitly commercial nature of this venture. It exemplifies how business decisions are as much in charge of cultural change as artistry, if not more so. It highlights how a young businessman helped shape the next 3 decades of “alt-music” and the culture it spawned. One the one hand, the story of gentrification is played out in Judgement Night’s tale of the suburban’s violent co-option of the urban in both the film’s story and the soundtrack’s aesthetic. On the other hand, Happy’s trajectory tells the story of the commercialization of “alt rock / indie music culture.” It’s a story that starts when punk broke in ’91, grows up through rap-rock and culminates in the late 2000s with indie music’s mainstream moment. The cultural trajectory we can see taking place in Judgement Night is the trajectory of the musical expression of youth counter-culture once the counter part of it is erased.

Rap-rock on the Judgement Night soundtrack may feel like a sales gimmick for a mediocre movie, but it matures into the cultural product of a material reality. It is the product of predominantly white suburban male youth who want to rebel and be angry but have nothing really to rebel against or be angry about. The sanitized hipster moment, for lack of a better term, doesn’t have even this level of cohesiveness. It’s a hard moment to characterize, because it’s the aesthetic of gentrification after the violence of displacement. It’s the sound of a Starbucks that stands where a hardware store used to be. It’s not a sound of a particular place or group, because it’s the sound of a place after its identity has been scratched out and replaced with an amorphous “hip” identity. In a word, it’s the sound of the suburban after it has colonized the urban.

This is why Judgment Night is such a vital artifact. The film tells the story of a bunch of dudebros accidentally finding themselves in the inner city and proving their manhood through violence before making it back to the suburbs. This is the first moment of gentrification and the rap-rock part of the soundtrack matches it, but “Fallin’” has the seeds of what’s to come. It predicts the aesthetic of the gentrified urban culture – when commerce has triumphed and thus no longer needs to express itself vulgarly, instead choosing to mumble. Whether we know it or not, whether we like it or not, we are the children of Judgement Night.