Cancel The Real Enemy: The Vindication of Sinead O’Connor 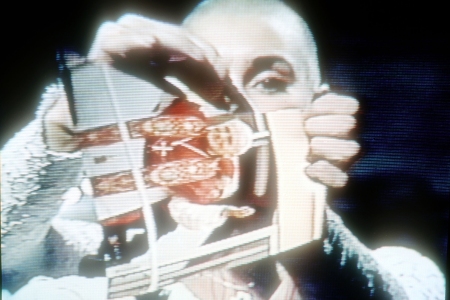 As the evolution of cancel and call-out culture continues to play out, we have now found ourselves in the more even-grounded reappraisal era. While #MeToo revelations exposing the corruption of powerful elites continue to surface, figures like Megan Fox and Britney Spears are rightfully experiencing vindications of their formerly maligned reputations. The #FreeBritney campaign was initially ridiculed and dismissed as conspiratorial nonsense, but is now universally respected for its illumination of the way conservatorship laws engender systematic abuse. Many current public figures have found themselves on one end of the spectrum - either cancelation or exaltation - but few individuals have experienced both as lucidly as Sinead O’Connor. She is sometimes credited as the first precursor to cancel culture, albeit for reasons that merit the opposite public response. While she hasn’t received the full exoneration she deserves, her story remains an astonishing testament to the price of remaining true to your moral compass.

Born to a devoutly religious single mother in Ireland, O’Connor became accustomed to criticism, punishment and a generally fearful environment at an early age. Her trademark buzzcut and shapeless attire were not merely a rejection of gendered stereotypes, but also a deliberate act of self-protection. Equating feminine beauty with danger, she didn’t want any of the sexual attention that could threaten her sense of safety. O’Connor has always been vocal about the abuse she endured at the hands of her mother, and escaped only to find herself in the confines of the equally repressive Magdalene Asylum. However, her acrimonious teenage years fuelled her artistic ambitions, and it wasn’t long before she caught the attention of U2’s former manager, Fachtna O'Ceallaigh, and began working on her debut album.

When O’Connor recorded The Lion and the Cobra, few critics anticipated the scope of her artistic ambition. She was never going to let herself be managed and directed by some producer, and ended up going into personal debt to fully realize her searing art-rock masterpiece. Songs like “Troy” and “Jerusalem” highlight the deft interplay between her haunting vocals and thunderous instrumentation, while “Mandinka” extends a hand to the mainstream without compromising her individualistic ethos. The album garnered radio plays and college credit in equal measure, and proved that O’Connor was a pop artist capable of succeeding entirely on her own terms. However, while her debut put her in the spotlight, it was the lead single, “Nothing Compares 2U,” from I Do Not Want What I Haven’t Got that made her a household name. It quickly ascended to the top of the international charts, and the video permanently engraved O’Connor’s tear-stained face into the cultural consciousness. Despite the popularity of the single, other tracks like “Black Boys on Mopeds” and “The Emperor’s New Clothes” foreshadowed that her aims were far more political than commercial. She never wanted to be famous, but she wasn’t going to waste the privilege and opportunity to make a statement.

The most infamous moment of her career came at the height of her success in 1992, when she was invited to perform on Saturday Night Live. Deviating from the planned performance, she sang an altered rendition of “War” by Bob Marley that culminated in the emphatic destruction of a photograph of Pope John Paul II. She declared “Fight the REAL enemy” as the audience sat in silent incredulity. O’Connor was keenly aware of the influence of a platform long before it became a buzzword, and she used hers to highlight the widespread corruption of pedophilic members of the Catholic Church.

Unsurprisingly, the public response was swift, heavy-handed and cruel. She was banned from NBC for life, booed off stage at a Bob Dylan tribute concert the following week, and eviscerated by op-eds from across the political spectrum. Joe Pesci then hosted SNL at the height of his popularity, and made a comment about “smacking her” to thunderous applause and laughter. He and the liberal-leaning Hollywood media were far more outraged by a protest than the actual abuse of countless children, and adopted a hollow position of moral superiority to dismiss, invalidate, and intimidate an artist that was fearless enough to hold truth to power.

Most viewers understood O’Connor’s act to be a defiant protest of the Catholic Church, but few understood the depth of which the subject had affected her personally. The photograph belonged to her mother, and signified how the abuses of the Church permeated a vicious generational cycle. Many of the victims not only suffered themselves, but inflicted their suffering on those dependent on them. While she wasn’t shy to describe her mother as an “evil woman,” O’Connor also empathized with the fact that “it wasn’t her fault” as she was a deeply wounded person herself. The pair share a striking physical resemblance, which contrasts the scaled-back, androgynous look O’Connor adopted in her youth. She didn’t want to become her mother, and their early resemblance was an uncanny reminder of the danger of that possibility.

O’Connor’s ensuing fall from grace was nothing short of merciless. Even Madonna, who achieved boundless commercial success on the back of blasphemous gimmickry, felt the need to publicly disavow and mock O’Connor’s actions. The all-around media assault not only halted her career in its tracks, but reignited the mental health issues that had consumed her childhood. In the following years, she received diagnoses of Bipolar Disorder, BPD and C-PTSD. These revelations helped her to understand her own mental state, and how to navigate her life out of the spotlight. This included becoming an ordained Catholic priest, a conversion to Islam, and a name change to Shuhada Sadaqat. She has also experimented with musical reinvention, releasing albums in the Reggae and Traditional Irish genres to critical acclaim. Never destined to be a pop star, O’Connor actually considered the SNL fallout to be a blessing in disguise, as it afforded her more artistic freedom and less public scrutiny.

As the twenty-first century progressed, the issue of systemic child abuse within the Catholic Church finally came to the forefront of the media while O’Connor retreated into its annals. Survivors were finally given a sympathetic platform, which culminated in the movie Spotlight winning the Oscar for Best Picture in 2015. The film depicts the true story of the Boston Globe’s team of investigative journalists that exposed the Catholic Church’s role in a Boston child sex abuse scandal. While the film (and more importantly, the journalist’s work) represents a positive turning point for survivors of abuse, it was ironic to see the same Hollywood elite that ruined O’Connor’s career congratulating themselves for collectively lauding a milquetoast rendering of her exact message. We are fortunate to now inhabit a cultural climate where powerful institutions are more vulnerable to exposition, but it’s important to exalt the individuals that were stamped out along the way. Especially ones like Sinead O’Connor, whose moral convictions were never influenced by political expediency.

O’Connor has not received the full vindication she merits, but she has been able to find a sense of inner peace and purpose in recent years. She has also received far more favourable treatment from the media, with self-assured and charismatic appearances on various talk shows. Her recently published memoir, Rememberings, combines the characteristic humour of her early interviews with the salient wisdom that comes from living an honest life. It’s an open window into a sharp mind, and she weaves the high and lowlights of her career into a narrative that never feels depressing or victimized. Along with the legacy of her artistic output, O’Connor will eventually be remembered as the pioneering activist that she’s always been. Staying true to your values sometimes comes at a self-destructive cost, but it’s a price that true influencers are willing to pay.

All Four Animals Tony Goes Crazy Over on The Sopranos and What They Mean
Don't Kink Shame: Titane and its Deconstruction of the Automobile
Where Drake Puts His Money
Next