Now I Live at the Nowhere Inn

In her feature acting and writing debut, St. Vincent communicates the disparity between personality and persona through a darkly comical nightmare. 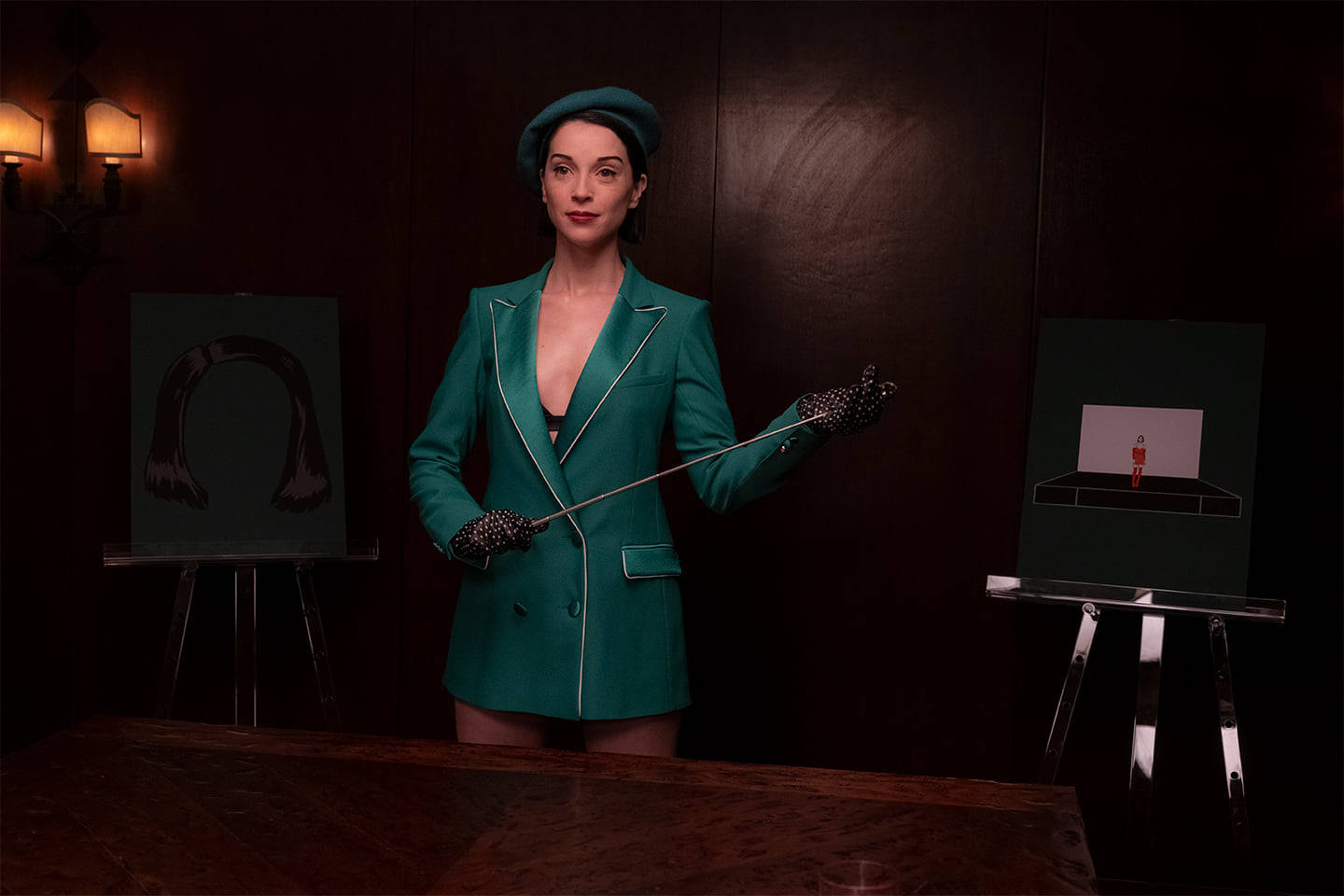 As the bifurcation between our physical and digital selves become more pronounced in its disparity, it becomes increasingly evident that what we give to the world takes away pieces of our soul. Whether it is the art we create or the digital projections of ourselves that we present and commodify, turning parts of our personality into a performance pulls us further from reality and keeping grounded can become quite the task. Portlandia creator/Sleater-Kinney mastermind Carrie Brownstein and, in her feature acting and writing debut, Annie Clark (St. Vincent) use The Nowhere Inn to communicate the disparity between personality and persona through a darkly comical nightmare.

The film follows fictional versions of Clark and Brownstein as they embark on St. Vincent’s MASSEDUCTION tour. In the film, Brownstein chooses Clark as her subject for a documentary film, but seemingly impervious to the Hawthorne effect, Clark’s real life presentation comes off as rather lacklustre in comparison to her onstage antics as St. Vincent, portrayed through intercut live footage as mighty and dominant. To make the documentary more palatable, Brownstein asks Clark if she can integrate elements of her onstage persona into her daily life.

This is a huge, potentially detrimental mistake.

It’s easy to see why The Nowhere Inn befuddled crowds at the Sundance premiere. As the line between Annie Clark and St. Vincent begins to blur, The Nowhere Inn spirals from a lighthearted music mockumentary to a feverish exploration of, in Clark’s own words, Lynchian dream logic. The film’s casual shifts from live concert photography to zany comedy to disorienting surrealism to outright horror can be jarring and even off-putting, but its structure emulates the state of its protagonist. As the nature of Clark’s identity becomes less easy to decipher, so does the nature of her film.

The Nowhere Inn immerses itself in the themes and performance of identity, taking cues from Nicolas Roeg’s Performance and Ingmar Bergman’s Persona. At the beginning of The Nowhere Inn, Clark wants to use Brownstein’s documentary to become more in touch with herself, so she tries to show people who she really is as opposed to what they see when she performs. But as the film progresses, Clark becomes aware that Brownstein and the world around her have no interest in the "real" her–only the version of her that best appeals to their desires. We watch Clark try to control this image as an attempt to have autonomy over how she is perceived, but the idea of "St. Vincent" becomes a parasite that starts to consume her and the people closest to her.

The film reckons with the expectations of performance, not just for artists but in day-to-day life. Whether you're on a date or a job interview, an expectation of authenticity tends to control an outcome… but only positively if that authenticity adds value to the person across from you. People don't want honesty–they want you to extract the parts of yourself that make you appealing. Sometimes, especially in the case of the celebrity, the outsider's desired extractions are perverse. In one of The Nowhere Inn's most morbid moments, Brownstein unknowingly takes Clark to visit her father in jail–triggering her trauma to elicit something "real" for the documentary. These expectations to be the desired version of yourself over the genuine are enough to make you lose touch with your true identity, or even, in the case of Clark’s character, descend into madness.

As a MASSEDUCTION tour attendee, I was elated to discover that The Nowhere Inn interpolates live concert footage from the tour into the film. What I did not expect was for these interpolations to serve as an allegory for Clark’s character arc. A particularly memorable moment of the show was Clark being harassed by a masked figure during her performance of the internet anthem "Huey Newton". This culminates in the masked figure handing her a guitar for the song's final movement, seemingly forcing her to play for her life. The film takes this moment and applies it with darker connotations than can be implied by any live show. As the narrator of "Huey Newton" becomes enshrined in a tomb of zeros and ones, this interpolation comes at a point in the film where Clark has become a prisoner of her own performance.

What is the Nowhere Inn?

The film makes no attempt to explain it to the audience. We see it–an otherworldly dimension akin to Twin Peaks's Red Room that Clark traverses in the film’s climax where she is forced to watch herself perform–but its meaning is left ambiguous. All we are given is the film’s titular song's chorus:

"Here at The Nowhere Inn

Where nothing and no one wins

Where our last days are spent

Wasted on song and sin

Here at The Nowhere Inn

The hallways are labyrinths

Where I last sold my myth

Now I live at The Nowhere Inn"

If I were to hazard a guess, I would say that the Nowhere Inn is the liminal space between who we are and what we present to the world; the space we move in between to function in tandem with our social code. I don't believe its existence is inherently malevolent, the film has moments where it depicts it as romantic and picturesque, but it is a place that can weigh us down if we're unable to discern our purpose for being there. The film argues that, for one reason or another, we all have moments where we need to perform in order to progress. But when we lose track of why we are performing, we run the risk of the performance taking hold and never being able to return to ourselves, trapping us in limbo between reality and projection. It's where Clark and Brownstein end up in the film's conclusion and, if there is any lesson left to be learned from such an elegantly crafted trance, it's where we could end up too.

All Four Animals Tony Goes Crazy Over on The Sopranos and What They Mean
Don't Kink Shame: Titane and its Deconstruction of the Automobile
Where Drake Puts His Money
Next