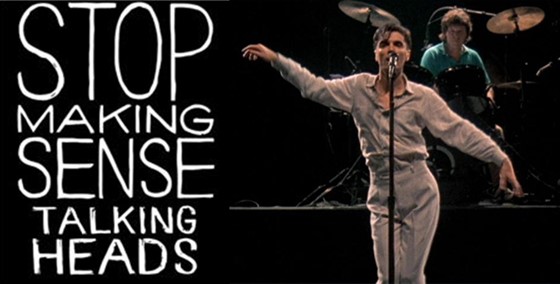 By the end of 1983, Talking Heads had solidified their reputation as the most cutting edge band to burn through the punk scene. Album after album they had found new ways to redefine the boundaries of genre. The one two punch of Fear of Music in 1979 and Remain in Light in 1980 merged disco with avante garde in one of the first proper iterations of dance punk and used afrobeat to push the limits of rock music respectively. Then came Speaking in Tongues, a pop album more or less in an effort to capitalize on the wide reach of the MTV viable “Once in a Lifetime” off Remain In Light. With a high charting crossover record, It was time for Chris Frantz, Tina Weymouth, Jerry Harrison, and band leader visionary David Byrne do something progressive in another medium than the LP.

Stop Making Sense was the concert film that would act as a visual companion to the sonic force Talking Heads had been become over their six years of relentless output. The band hired New Hollywood director Jonathan Demme then fresh off the Oscar winning Melvin and Howard to shoot the film over the course of four nights.

The performances took place at the Pantages Theatre beginning on December 3, 1983 with the band raising $1.2 million out of pocket to get the film made. Sound recording was completed using 24-track digital recording, becoming the first film ever to do so and was mastered by the legendary Ted Jensen. This resulted in an unbelievably clear soundtrack, dubbed less compact than the originals by the band.

Unsurprisingly, this was going to be big on concept. To start the show, Byrne appeared on the stage with a boombox and an acoustic guitar for a one man performance of early hit “Psycho Killer.” From that moment on, every new song would bring out an additional band member. This continues until “Slippery People” where respected funk musicians Alex Weir of The Brothers Johnson, Ednah Holt, Lynn Mabry, percussionist Steve Scales, and synth genius Bernie Worell joined the band on stage providing outstanding backing to their signature rhythms. Anybody who’s seen the film caught the feeling: all of a sudden there are nine people here shot beautifully, hammering out their instruments and having the time of their lives. Choreography, costume changes, and projected visuals of modern objects and landscapes accentuate the performance.

“Burning Down the House,” “Take Me to the River,” “Crosseyed and Painless,” and “Life During Wartime” are practically unstoppable in the film and thanks to a pitch perfect vocal performance by David Byrne and the gorgeous moog melodies of Professor Bernie Worrell, by then a permanent member, “This Must Be The Place (Naive Melody)” has never sounded better. The band’s unprecedented live reputation and unique, image forward concert experience by the end of the film is unquestioned.

Demme refrained from focusing on crowd shots and even considered shooting on a soundstage to which the band vetoed citing the need for an audience. One night shooting of the four was dedicated solely to distant wide shots, while other nights were dedicated to different sides of the stage to limit the intrusion of cameras.  For the classic “Girlfriend is Better,” Byrne came out in his oversized business suit yielding one of the most recognizable images in alternative music.

When it received a wide theatrical run in October of 1984, Stop Making Sense was a force of nature. Dean of American Rock Journalists Robert Christgau called it “The best concert film ever made” while notoriously tough film critic Pauline Kael called it “close to perfection.” The soundtrack, an abridged 9 song treatment featuring a set of black and white stills from the movie was released in companion.

Stop Making Sense deserves to be recognized for its amazing performance caught on film, but it’s also the most innovative band of their day in peak form finding a new way to communicate their music through visual medium.