Don't Kink Shame: Titane and its Deconstruction of the Automobile

In Julia Ducournau's Palme D'or christened body horror masterpiece, Titane takes what the car represents and embeds its meaning into a harrowing yarn of internalized misogyny. 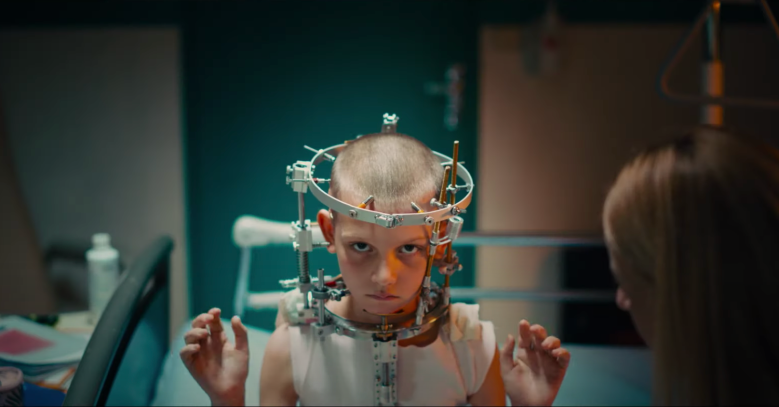 Cars, a practical means of transportation, have been repackaged and sent back to us as a fetish–transformed into a prominent emblem of patriarchal iconography. Edward Bernays, the father of 20th century public relations, was the first to find a link between the automobile and male sexuality. The car is a status symbol; what a man drives defines how well he earns–the kind of breadwinner he could be to a family. Whether or not Bernays' theory was based in hard psychology or simply exploited archaic gender roles was arbitrary: the fact is it stuck. Titane, the most daring and visceral film of the year, takes what the car represents and embeds its meaning into a harrowing yarn of internalized misogyny.

Titane follows the enigmatic and bloodthirsty Alexia (Agathe Rousselle) as she's forced to go on the run after a seemingly random murder spree. Before going into hiding, Alexia furiously fornicates with a car and becomes pregnant–a mind boggling plot point that serves as the logical progression of David Cronenberg's Crash. As absurd and disturbing as it sounds, director Julia Ducournau's pastiches body horror without falling into its gratuitous trappings. Beneath its fleshy, often horrifically mutilated exterior, the best of the body horror genre uses its gory motifs as tools to present intricate ideas. Titane is no exception.

Ducournau chooses fetishized commodities to serve as an extended metaphor to structure her films around. In her cult hit Raw, she deconstructs what meat means to our culture; not just the forbidden flesh that Justine (played excellently by Garnace Marillier who also has a small but integral role in Titane) has refrained from eating for years and now so desperately craves, but the warm skin of a human she desires as a young adult discovering her sexuality or the blood that connects her and her family as she discovers disturbing hidden truths. Ducournau knows how to take a simple image and strip it for parts; it's only fitting that her next film would shape itself around the car.

Trying to understand Titane's extended metaphor has been a topic of hot debate. Indie Wire critic Jude Dry described the film as transphobic which, by this writer's approximation, is a tragic and unfair reduction of its accomplishment. Titane isn't exactly a trans film. Titane is a film about identity. This obviously means it lends itself to a reading through a trans lens… but to say that the film is solely about the trans community–solely about any community–robs it of its nuance. Titane tells a story about how we alter our identity to fit within structural confines and how these forced alterations can become embedded in the succeeding generation. These "structural confines" can take many forms. I chose to zero in on internalized misogyny. It helped me come to a personal understanding of what the car means to Titane.

Alexia's fixation with cars starts from a young age. In the film's opening sequence, a young Alexia maliciously distracts her father from driving, who is heavily implied to be abusing her, causing him to run his car off the road. Whether her interference was an impulsive act or a calculated move, the violence that the car represents provides Alexia with her first hope of escape. She clings to it. As an adult, she makes a living capitalizing off young men at motor shows as a dancer. In a colorful and jaw dropping continuous shot, Ruben Impens's cinematography feels like the evil force from the end of The Evil Dead taking the form of the male gaze.

Alexia's acceptance of the car in her life serves as her internalizing the patriarchal toxicity it represents. She engages in violence to exhibit control over her life. She assumes anyone who tries to form a connection with her is merely attempting to exploit her. As her pregnancy progresses, she starts to secrete motor oil. Her insides turn to chrome. These instilled values are destroying her inside and out, personified by the car-child growing inside her belly.

Alexia's perception of herself and masculinity changes when Vincent (Vincent Lindon) takes her into hiding (through an elaborate and manipulative scheme I won't spoil in this article). Vincent is dealing with his own patriarchal torment. The firehouse captain regularly injects himself with steroids, both to maintain a façade of strength to his subordinates as he becomes an older man and also to compensate for how he wasn't strong enough to save his dead son.

Despite his flaws, Vincent shows Alexia a version of fatherhood that was never present in her biological dad. Think of what a fire truck represents: it's strong and sturdy, trustworthy and reliable–it's always there when you need it and it will always protect you from harm. Vincent shows Alexia affection, support, and protection while asking for almost nothing in return. It perplexes her. A non-transactional relationship is not something she was conditioned to understand. She can't bring herself to kill Vincent with the same ease that she has been able to with others before him. He recontextualizes her understanding of cars and therefore her understanding of people.

Titane uses Alexia's perception and assimilation of cars to help us understand her psychology. Her actions are horrid and reprehensible, but underneath her menacing gaze hides torment and a deep longing for parental warmth. She spends most of the film either changing herself to be accepted by people or trying to distance herself from others entirely–both of which are to her detriment. Ducournau claimed in an interview with Vulture that she actually cares very little for cars, but in Titane she uses them to deliver a unique take on the horror of self-hatred.

All Four Animals Tony Goes Crazy Over on The Sopranos and What They Mean
Where Drake Puts His Money
Cancel The Real Enemy: The Vindication of Sinead O’Connor
Next