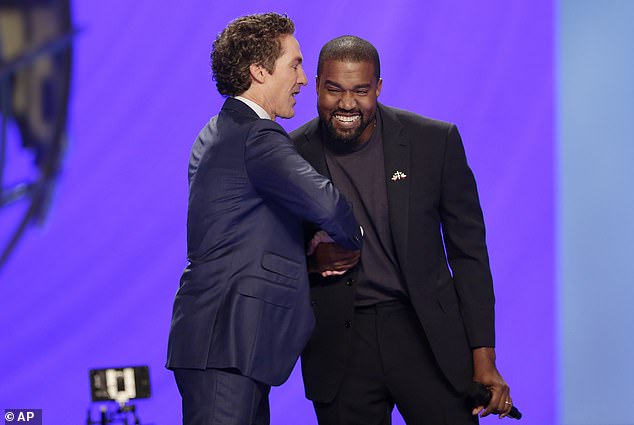 Yesterday, Kanye West and his now famous band and choir Sunday Service helped deliver Joel Osteen’s Sunday Sermon to an audience of 17,000 at his gargantuan Lakewood Church in Houston Texas. The appearance of newly devout Christian, West at the hugely successful televangelist’s sermon, watched by 7 million people every week was widely reported leading up to Sunday. Originally intended to be free, demand for tickets was sky high with scalpers snatching them up and selling them on Stubhub, only to be invalidated by The Lakewood’s IT team. Still, actual ticket holders were seen on Ebay listing anywhere between 60 to 500 dollars a ticket.

It began at 11am. For about 20 minutes West stood on stage next to Osteen, awkwardly evoking the same picture as a phone fundraising telethon, but to West in this case, Joel Osteen cares about black people. They discussed how the Devil had been distracting him, how The Life of Pablo was ultimately an unrealized gospel effort, and the visions of God he had during his mental breakdown and hospitalization, inspiring Jesus is King. He declared “Closed On Sunday” as the hardest record ever made and explained its message of protecting your children from “the indoctrination of the media.”
‍

When Osteen asked West his thoughts on worshiping money and fame West had the answers:

Kim Kardashian and North West could be seen through the Church’s jumbotrons beaming in the front row.

Kanye then gave a prayer and Sunday Service came out. I give it to Kanye, these guys sounded amazing. With a 2 hour performance that included brilliant versions of “Say My Name” and SWV’s “Weak”, reformatting the lyrics in relation to Christianity, Sunday Service gave the most dialled performance of their career since the Adidas show room. Osteen took the stage during the performance, no, not in a hypeman capacity but rather to share several lessons on using God to guide oneself to greatness.

The performance was met with light protest as Joel Osteen is a bit of a controversial figure. With a net worth of around 50 million dollars, his televised sermons are broadcast to about 20 million people a month in over 100 countries. In 2003, Osteen’s Lakewood Church acquired the Compaq Center, the former home of the Houston Rockets and put through a 105 million dollar renovation. Osteen has been criticized for promoting prosperity theology, the belief that material rewards are the will of God for all Christians.

He refuses to preach about homosexuality though when asked says he’s opposed to same-sex marriage pointing to the Scriptures as his reasoning. In 2017, in the aftermath of Hurricane Harvey, Osteen received backlash for not making his 606,000 square foot church stadium available as an emergency shelter, a story to which Osteen has vehemently denied. Less than a year later it was reported that the Lakewood Church had purchased 1.1 million dollars in restoring Houston’s infrastructure.

Kanye and Sunday Service are scheduled to return to the church this evening to perform songs from his latest album.

Check out our review of Jesus is King here.