What About: Orville Peck

What About: Orville Peck

The first in our "What About" breakthrough artist profile series. 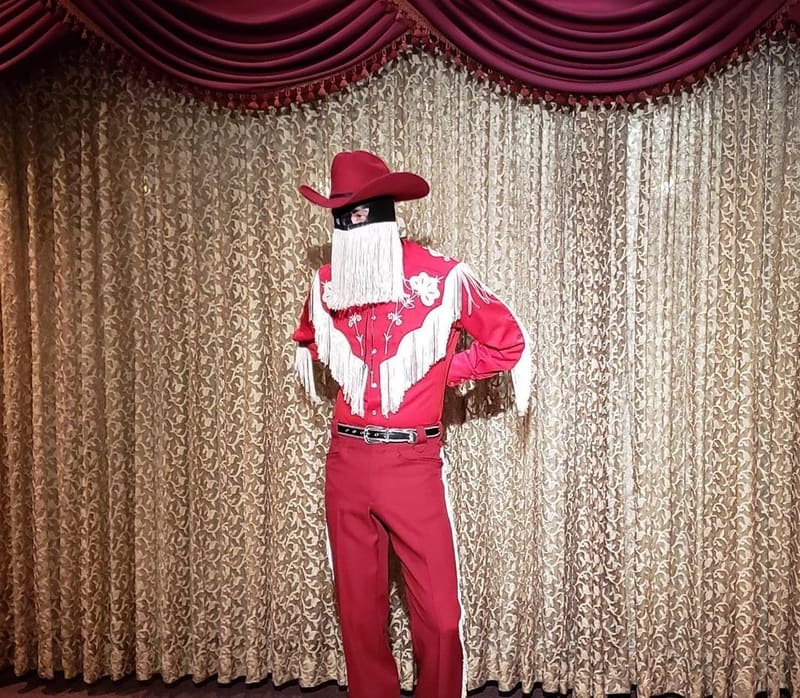 Welcome to "What About", our brand new series of artist profiles. We're gonna do our best to describe why you should give a shit about the music makers that are either on the hard come up, and/or on the cusp of mainstream success, making waves amongst fans, rock journalists, and pundits. A lot of you will know these artists and a lot of you won't know these artists, but if good music persists you will all know these artists at some point.Alternatively you might know these artists but can't grasp why they're blowing up. You see we live in a crazy world now where exciting bands, rappers, and producers are seemingly coming out of nowhere with some crazy or controversial story and even better music. We hope we can give some context and introduce you to some fresh stuff that's worth saving or even complaining about. So to begin; what about Orville Peck?‍

Let’s start with the mask. Enigmatic as much as it is conspicuous, new wave country singer Orville Peck’s face tassels are a balancing act between mystery and notoriety. Though this meticulously orchestrated anonymity may be one of his most powerful assets, Orville Peck, a self proclaimed cowboy, leaves a few nuggets on the table. Based out of Toronto, gay, and tightlipped about his real origins, Peck’s instantly iconic mask and lone ranger aesthetic is impossible to ignore, but so is everything about him.

Orville Peck is an indie artist that makes country music in style and subject matter dealing with themes of loss, love, heartbreak, and the anxieties that come with them. But Peck, a gay man making music in a infamously un-gay genre, updates these hallmarks with songs about falling in and out of love with men. His sexy menacing baritone, in the vein of Roy Orbison is more pain than pleasure, like a bruise that’s fun to touch. This is definitely not pop with bolo ties. The arrangements are informed by shoegaze, dream pop, and post punk groups like The Cure, yielding a unique genre hybrid. Peck’s understanding of both the misfit archetype and the antihero takes cowboy culture and connects it to alternative music. Most of these songs are about being weird in a mundane world. His backing band is pieced together with members of Toronto post-punk group Frigs making a full transition to country and even dressing in cowboy couture for concerts.

Despite strong coverage as a trending freshman in the indie world, Peck’s wikipedia page is small, vaguely stating his birthplace as Canada. Vice presumably described him as “older than 20 and younger than 40,” though he gave his age to The New York Times as 31. With focused live performances often involving drag queen warm up acts, Peck’s motif pulls the nostalgia and ambiguity of David Lynch and marries it with the campiness of John Waters.

One of the most exciting artists to emerge out of Toronto in recent memory, Orville Peck represents shifting values in country music and challenges the Nashville system’s famously conservative limitations. It’s a turn of the decade revision in social subversiveness and a regained interest in weirdness widely mislabelled as shock value, where Kacey Musgraves can talk about LSD and Young Thug wears dresses. Peck is a big deal amongst the gay community, the fashion world, L.A. hipsters, and even factions of middle and southern America all who form a sizeable cult following called “peckheads”.

He told exclaim "I grew up a fucking weird, freaky gay kid with no friends who never felt included in anything socially and I connected with country music," says Peck. "So the stigma that country music is made for well-adjusted straight white men is just baloney. That's something that has been perpetuated by mainstream country gatekeepers in order to control the narrative. They're not able to do that any longer. That is, I think, the difference.” And getting there wasn’t easy.
‍
Orville Peck had been a fixture of the Toronto punk scene until he made the switch over to country with the debut of “Big Sky” in late 2018, though he swears he had been calling himself Orville since the age of seven. The son of a glam rock sound engineer, Peck had lived in Africa and Europe throughout his youth, studied ballet, kabuki, and acted. Early shows were met with ridicule, discredit, and confusion, apparently at the idea of something so disruptive in the country community.

His subsequent rise to fame as Orville Peck was seemingly blink fast beginning 2019 playing Toronto’s 120 capacity Monarch Tavern before graduating to Lee’s Palace and finishing the year with sold out concerts at the Danforth, exponentially bigger venues with every booking eclipsing in sold out shows in Brooklyn and L.A. The scene took notice and Peck dropped Pony in March through Sub Pop in the States and Royal Mountain at home.

Everyone was talking about the mask which received a similar amount of media attention as his music, but the mask runs deeper than pre-Vaudevillian antics. Orville had been working the scene for 20 years but had to put on a mask to find himself. By creating a persona, he becomes free to be exposed without the compromise of reputation. With the mask, Orville Peck is all of us and nobody at the same time. But alter-ego is a staple of country music and Peck’s mask is just a viral edition of Dolly Parton’s wig, Johnny Cash’s black clothing, or Waylon Jennings’ stories. Yet Peck reconsiders the symbolism of the word outlaw in country music.