How indie band Phosphenes are making it in and out of Nepal. 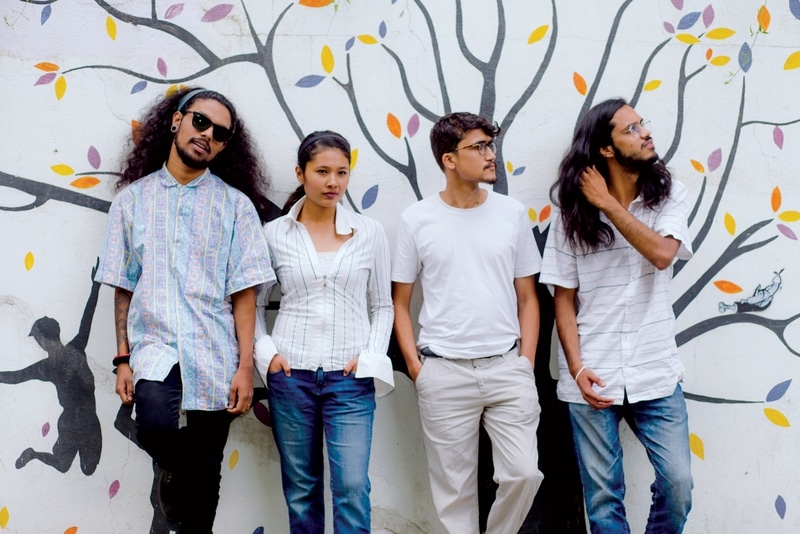 Welcome to "What About", our series of artist profiles. We're gonna do our best to describe why you should give a shit about the music makers that are either on the hard come up, and/or on the cusp of mainstream success, making waves amongst fans, rock journalists, and pundits. A lot of you will know these artists and a lot of you won't know these artists, but if good music persists you will all know these artists at some point.Alternatively you might know these artists but can't grasp why they're blowing up. You see we live in a crazy world now where exciting bands, rappers, and producers are seemingly coming out of nowhere with some crazy or controversial story and even better music. We hope we can give some context and introduce you to some fresh stuff that's worth saving or even complaining about.

In mid 2019, while sitting around at a friend’s house in central Kathmandu, sipping wine and strumming the guitar, two bandmates composed lyrics for their first song in their mother tongue.

“They sent me a message on Whatsapp - ‘Guys it’s done. We finally have a Nepali song!’” recalls Aman Karna, a guitarist, synth player, and third member of Kathmandu-based indie band Phosphenes.

Prajwal Aryal and Abhishekh Pokhrel, both guitarists and singer-songwriters, have been playing music together since high school and joined sounds with Aman in 2016. Their first Nepali song (though by no means the band’s first hit), came to be called ‘Eklai Huda Ta Jhan’ and, loosely translated in English, is about loneliness and the fear of losing a lover. It is one of the newest releases from a group that has seen growing local success and now has their sights firmly set on the international scene.

Phosphenes are the little rings or specs of light that appear when you apply pressure to your eyeball, or when your eyes readjust to brightness. These abstract illusions can, in a way, characterize the band’s sound - a fusion of indie rock, dream pop, electronic and psychedelic music. Many songs feature tranquil guitar melodies interspersed with gentle piano and adult contemporary or electronic transitions. But, as Aman points out, the term ‘indie’ is too broad to describe the band.

“Right now, everyone [in Nepal] is an independent artist because there aren’t many mainstream record labels here,” he says. “Most artists who are earning and touring are doing it on their own through Soundcloud and YouTube.” Phosphenes released their first song ‘Dust’ on Soundcloud in 2016, and followed up with a few Spotify singles and an EP called ‘Know This Time’ two years later.

The band was originally a group of four, but keyboardist and vocalist Supria Moktan left in early 2019 to pursue a teaching job. Aman joined in 2016 after seeing Prajwal and Abhishekh perform as a duo at a local festival. He was hooked. “I had no idea that people were making this kind of music in Nepal,” Aman says. “I thought they were really professional. Their [English] accents were so clear and I thought they were raised somewhere else. I confessed that I thought they were awesome.” He joined the band a few months later and began work on their first EP.

Abhishekh took guitar lessons as a kid while Prajwal worked with a vocal trainer, but the group is otherwise self-taught. They explain that their music and lyrics change with time and according to influential artists. “It’s all about the music that we listen to,” says Prajwal. “At first we listened to Damien Rice and Nick Drake, then Mac DeMarco ... our [songwriting] is always evolving.”

Some of Phosphenes’ songs like “Oh Love” and “I Got Flowers” are melancholy love ballads that one might think derive from personal experiences. But the guys insist that though they write collaboratively, it’s all fiction. “We put ourselves in a situation and then we write lyrics based on our imaginations,” says Abhishekh, adding that they find it easier to express themselves in English.

But making it as a musician in Nepal is not without significant challenges. A lack of support networks including management companies and record labels means aspiring artists have to spend a lot of money to record their songs, shoot music videos and promote themselves - ultimately taking time away from the creative process. And despite the huge numbers of Nepalis going abroad to find work, it is notoriously difficult to obtain a tourist visa for countries in Europe or North America to go on tour. “It’s really challenging and frustrating sometimes in Nepal,” Aman admits.

For now at least, Phosphenes is looking on the bright side of being an independent group. At a recent sold out private gig in the Jawalakhel neighbourhood of Kathmandu, fans gathered with phones out, recording and singing along to almost every word of every song.

“Being independent is chill. We can make our own sound. We have freedom,” says Abhishekh. “But at some point, we have to [grow our audience] grow our listeners.” When asked where they see themselves in a year, the guys didn’t pause to think: touring. They’ll start in India (the open border between India and Nepal makes it an easier first stop) and then aim for wherever else is possible. “If we get the chance to go overseas, that would be the dream,” says Aman.

Their second EP, ‘Sullen Days’ will be released later this year. In the meantime, check out their latest video for ‘Are you gonna leave me.’