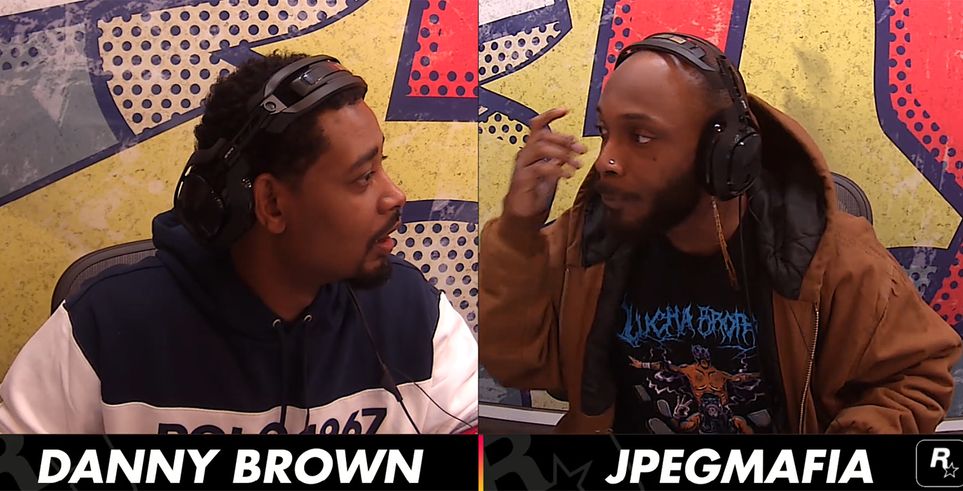 Announced Jan 31, 2020 for Feb 1 the feed featured rappers Danny Brown and JPEGMAFIA in gameplay for one hour that was disorganized and badly received for Brown’s abrasive remarks stemming from the lack of realism in the game.

Technical difficulties and irregularities plagued the show with staff pausing the stream to adjust player settings and at various points an anonymous user threatened to shut the game down by hacking into the Rockstar database.

During the stream, JPEGMAFIA and Danny Brown, who hosts GTA radio station “iFruit Radio” became progressively more intoxicated and the heist level they attempted was failed four times until the show ran out of time. Throughout the game the hosts made efforts for Brown and Peggy not to pull out their guns and blow their cover in gameplay until Danny Brown went on a tirade regarding his experience with guns and robberies.

‍
He complained that commenters shouldn’t refute his gaming skills because he’s pulled off similar heists in real life, “If you wanna play these video games shootin’ motherfuckers? Go for real and shoot shit…I’ve shot guns AT people.” The Rock Star staff made their best efforts to divert Brown’s attention to the game and not his rants about street life in Detroit.

“Arizona, Phoenix? I’m from Detroit! Fuck am I in Arizona fucking with Mexicans that don’t speak English, I’ll tell y’all about other real shit I’ve been through.” At one point Brown seemed to be taking jabs at the gaming community and calling them incels, “if you a man and you play video games and you know how to shoot and you never shot a gun in real life you are definitely an incel.” At one point Brown even reminded the Rock Star staff that it was their decision to invite him to the show and that they should have known what they were getting into.

Eventually most commenters just began mocking the shortened broadcast and blaming Rockstar Games for Danny Brown’s antics. Aside from audibly stumbling into the room, JPEGMAFIA was quiet for much of the webcast and noticeably taken aback by Brown’s behaviour.

Danny Brown just recently dropped his video for “3 Tears” featuring Run the Jewels which happens to be produced by JPEGMAFIA.

Check out our review for Danny’s incendiary show at The Phoenix last November.